Since at least the Song Dynasty (960-1279) people in the Pearl River Delta have been ‘reclaiming’ the delta seascape to create new farmland. More recently reclamation in the Delta and up and down the China coast has been undertaken for port and airport construction, urban expansion, fish farm and theme park construction. The English term ‘reclamation’, implying a recovery of something already ours, is reflective of the modernity’s vision of a subservient nature. But activity in the reclamation zone also speaks to the permeability of the land-sea border and the tension between human projects and natural processes, especially when we think of 21st century climate change and its promise of inundation. Reclamation seems like a good fact and metaphor for thinking about ICS’s research theme ‘Heritage and Environment’ which, rather than just a combination of two research areas, is vitally interested in the culture-nature binary that haunts them and ways of transcending it.

The specific history of reclamation in the Pearl River Delta is entwined with the history of work-travel and immigration between there to California, Australia and other destinations and the transnational flow of environmental knowledge that accompanied it.

Denis Byrne joined the Institute in 2014 as a Senior Research Fellow specialising in heritage studies. He is an archaeologist whose work has been in Indigenous heritage conservation in Australia and in the cultural politics of heritage in Southeast Asia. His books Surface Collection (Rowman & Littlefield 2007) and Counterheritage (Routledge in press 2014) challenge Western-derived heritage practices in Asia and explore new approaches to the writing of archaeology and heritage. He is currently researching the transnational heritage of migration in the Australia-Asia sphere. 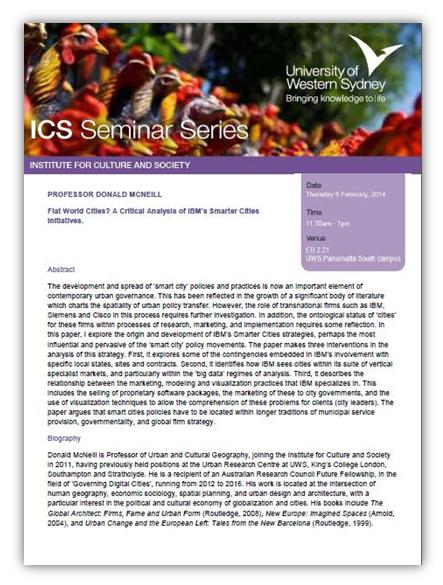