From 1990 to 2018, some twenty five China-born artists (not including Jenny Sages) became finalists for Australia’s prestigious Archibald Portrait Prize. Most of them came from mainland China in the 1980s and 1990s, although a few exceptions arrived after 2000. Many of them had had a specialist art school background in China, and some were finalists more than once. For this reason, the total number of finalist paintings by them was sixty four.

Jenny Sages as an artist from an earlier generation clearly does not belong to this Chinese group, because she was born in Shanghai in 1933, and left Shanghai in 1948, the year in which I was born in the same city, a few streets away from her home in the French Concession. In the Archibald competitions, she was twenty times a finalist, and seven times Highly Commended (runner-up).

I myself belong to the newer group of China-born Archibald finalists. I submitted my first entry work Mabel (1991) in 1992 but the work was not selected. In the following year I became a finalist and would continue to a finalist for seven years. Up until last year I was in the Archibald Portrait Prize twenty three times and fourteen times as finalist, including runner-up once in 1997. Up to now, thirteen of my twenty three Archibald works have been acquired by public or private collections. The rest of them remain with me in my own collection. In this exhibition I am showing eight from the twenty three and one of these is of course How to Explain Art With A White Rabbit (2015) which is in the collection of the White Rabbit Art Gallery. I thank Judith Neilson, its Subject and Owner, for kindly agreeing to loan it for this exhibition. The other seven are all in my own collection. Among these eight, three were Archibald finalists, and in the rest of the five, two, through some stroke of providence, won the Holding Redlich People’s Choice Award in the Salon des Refuses exhibition at the S.H.Ervin Gallery in 2003 and 2007.

I see myself as a natural portraitist. Because of the Archibald Prize which has been running for a century, I see Australia as my paradise and my lucky country, and I am pretty sure this country has inspired, and will continue to inspire, many other portrait artists in the world. 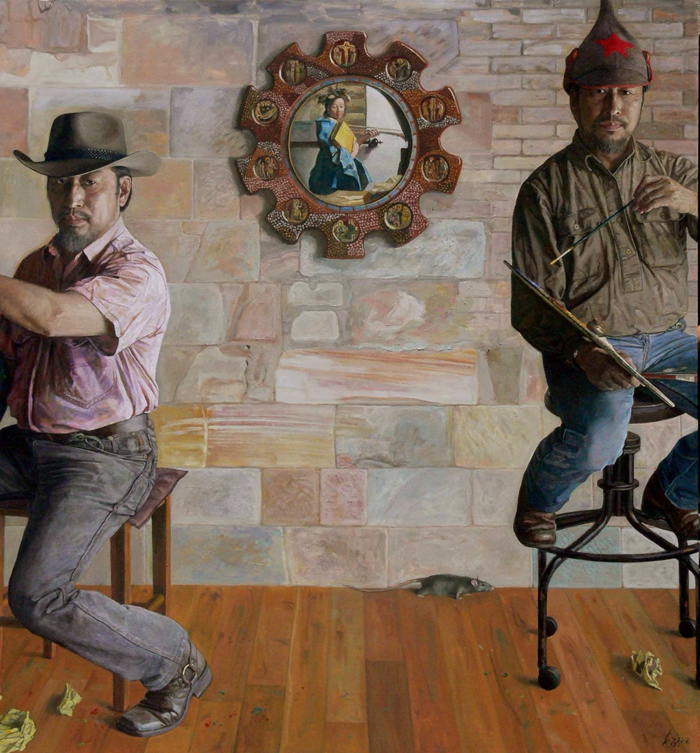 Jiawei Shen was born in Shanghai in 1948. Largely self-taught, he became a well-known artist in China in the mid-1970s during the Cultural Revolution. His oil painting Standing Guard for Our Great Motherland (1974) became an icon in those years and later shown in New York twice at Guggenheim Museum in 1998, and Asia Society Museum in 2008. In 2009 it was auctioned away in Beijing Guardian for the price of about one million US dollars. Now it is in the collection of the Long Museum in Shanghai.

From 1982 to 1984, he studied in the Central Academy of Fine Arts in Beijing, and later became a professional artist in Shenyang. He won the National Art Exhibition Prize in China five times.

Jiawei Shen moved to Australia in 1989 and for the first three years had to support himself financially by drawing portrait sketches for tourists at Darling Harbour. He looked on this experience as an opportunity to research portraiture and since then he has completed many accomplished portrait commissions in Australia and overseas. As a leading portraitist he was commissioned by the Australian government to paint official portraits for Pope Frances (2013), Princess Mary of Denmark (2005), Prime Minister John Howard (2009) and Australian Governor General Sir Peter Cosgrove (2018).

“Shen is a whole-hearted painter who has come through a tough artistic training in China. He has all the technical ability, the courage to take on ambitious compositions, and a hint of self-depreciating wit.” (John McDonald, SMH, 29/03/97).