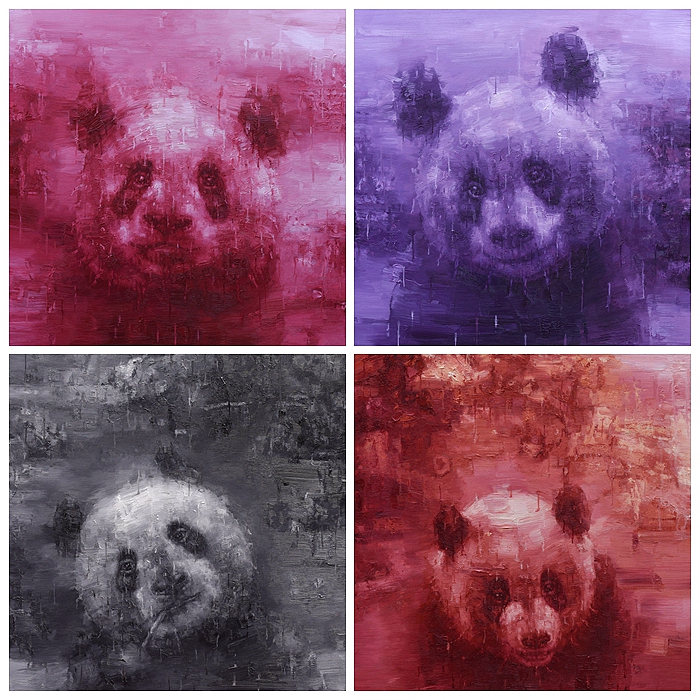 From ‘human beings’ to ‘Shan Shui with Panda’, the theme of Adam Chang’s paintings has shifted from the ‘national treasure’ level cultural celebrity portraits to the grand environmentalist natural kingdom series. Many claimed to have been stunned by the ‘sudden change’ of identity that is happening to a ‘portrait artist’. In fact, this feeling of shock could only have resulted from a misreading of him - although Chang has been internationally acclaimed for his impressive achievements in the art of portraiture, this represented only the tip of the iceberg in the bulk of his artistic attainment. The recent launch of his ‘Shan Shui with Panda’ series should be useful in drawing the attention of the international art world to the breadth of Chang’s artistic thinking and his aesthetic magnitude.

Adam Chang is often referred to as ‘a quiet artist’. This is because he, like a ‘hermit’, rarely has any contact with the world outside his studio. This seems to bear a connection with the spiritual ‘inertia’ of the asceticist practice of a senior generation of artists such as Zhao Wuji and Zhu Dequn. The difference is that Chang does not directly draw from the theory of ‘yijing’ (artistic conception) in traditional Chinese painting; instead, he follows the Taoist view of ‘Nature and Man in One’. Following the core concept of ‘harmony’, he is now moving his reflections from about ‘human beings’ to the ultimate realm of harmony between ‘Man and Nature’.

From the 2007 Australian national Archibald Prize finalist ‘Brian, the Dog and the Doorway’ to the 2011 People’s Choice Winner ‘John Coetzee’, from the shocking surrealist portrait ‘Salvador Dali’ (2017) to today’s high-profile ‘symbol of China’ combination ‘Shan Shui with Panda’, the new exhibition ‘Adam Chang’s Pandas and Treasures’ very well ‘captures’ some of most representative works of his ‘transitional period’.

The national Archibald Prize requires that ‘portrait subjects’ need to be cultural celebrities, but Chang has deliberately chosen to work on two ‘immigrants’- Brian Sherman and John Coetzee are both migrants from South Africa. This choice probably reflects the artist’s own immigrant background, but it simultaneously conveys his appreciation of the beauty of the Australian concept of multiculturalist society. From the cultural perspective of ‘national treasure’ as a symbol, if Brian Sherman’s identity as a philanthropist, John Coetzee’s identity as a poet and novelist and Salvador Dali’s identity as a master of artistic creativity display three dimensions of human civilization- ‘compassion’, ‘poetry’ and ‘mimesis’, the ‘Shan Shui with Panda’ series offers an ‘ultimate’ illustration of the philosophical altitude and the universal value of Lao Zi and Zhuang Zi’s ideal – let all ‘ Human Mankind Sharing a Common Destiny’ understand ‘Nature and Man in One’.

In Chang’s inner world, the ‘panda’ probably stands as an embodiment of the contribution made by the Chinese civilization to the world. However, the ‘Shan Shui’ here is not only ‘Chinese landscape’, but rather a general ‘image’ that communicates a globalized ‘Shan Shui’, or ‘the grand Shan Shui’ of the entire universe. If such an artistic vision psychologically and naturally ‘fits’ the upcoming international art trend in the third decade of the 21st century, one might say that, in a way, Chang has helped to ‘pioneer’ for world art through the use of ‘oriental aesthetics’ a ‘harmonious’ way out of a long-term western predominance in international artistic thinking.

Adam Chang (张鸿俊), born in Shanghai in 1960, was deeply inspired by traditional Chinese calligraphy and art in his childhood. And when he was in the middle school, he started to practice live drawing. He did it for five years. During this time, he started to access Western art and the work of the impressionist master Vincent van Gogh became an indelible influence.

Thanks to the reform policies, Chang became one of the first Chinese artists in the 1980s to hold a solo exhibition in China, and soon afterwards, his artworks started to appear in all the important exhibitions in the country. 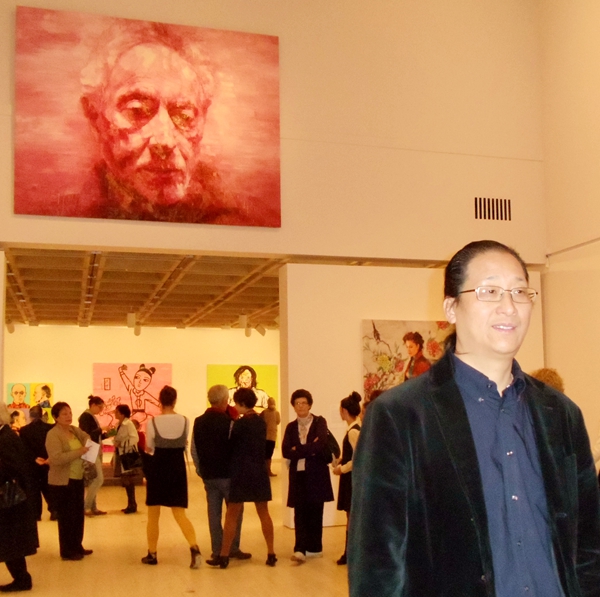 In 1987, three of his works were chosen for an exhibition in the First Shanghai International Arts Festival, where they were displayed side by side with the masterpieces by other Chinese master artists such as Liu Haisu (刘海粟) and Yan Wenliang (颜文梁). This event granted him his earlier reputation in the art circles of Shanghai as one of the most prominent artists across China.

In 1989, Chang participated in the Seventh National Fine Arts Exhibition of China. He was the youngest member of Shanghai Art Association to present works at the most important event for the country’s artistic community.

From 1989 to 1992, Chang pursued his study at the Shanghai Academy of Fine Arts, Shanghai University.

In 1992, his painting “Li Dazhao” was awarded the Grand Prize of Shanghai for Artistic Creation.

In 1997, Chang moved to Sydney to start his artistic career in Australia.

In 1998 and 2000, Chang’s works were twice nominated as a finalist in Doug Moran National Portrait Prize and they ultimately won the Third Best Work and Most Popular Work Prizes (voted by the public).

In 2001, Chang was selected as one of the 24 Most Outstanding Artists in Australia. His works were printed on the cover of the exhibition catalogue and collected by Australia’s state-owned art museums.

From 2005 to 2012, Chang’s works were nominated six times as a finalist in the Archibald Prize of the Art Gallery of NSW. He made it to the final list of candidate winners in 2009 and he won the People’s Choice award in 2011. These accomplishments turned him into an important part of the contemporary art history of Australia.

In 2006, Chang was awarded the title of “Official Artist” by Australian Council of the Arts.

In 2012, Chang participated in the Redlands Westpac nominated exhibition, a contemporary art exhibition co-hosted by Australia and New Zealand. His works “Charles Teo” (张正贤) was collected by the National Portrait Gallery of Australia. From this year on, Chang began to participate in major international art exhibitions.

In 2014 when Chinese President Xi Jinping (习近平) paid a state visit to Australia, Chang was invited as an outstanding Chinese artist to attend the high-level meeting on cultural exchanges, along with the Australian Prime Minister Tony Abbott and members of the Parliament of Australia.

In 2015, Chang’s works were exhibited at the Tenth Florence Biennale in Italy and the Contemporary Art Biennale at Medina Cathedral in Malta.

In 2017, Chang’s works were displayed at King Street near Buckingham Palace in central London, UK.

Chang remains the only  Chinese Australian artist that has signed agent deals with both European and Australian galleries. 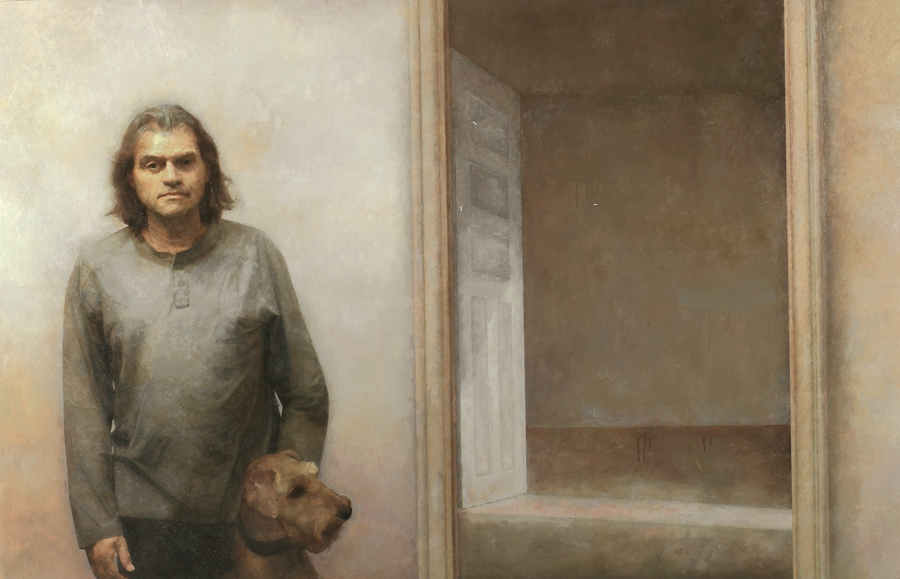 Brian, the dog and the doorway (2006) by Adam Chang, collection of The Gene & Brian Sherman Collection