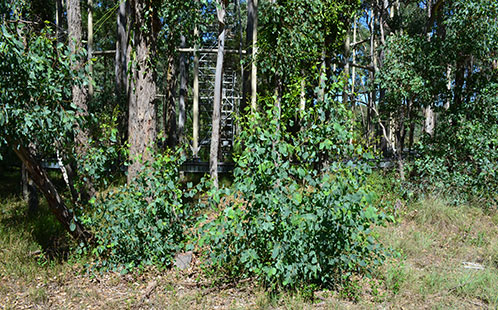 Newly-published research by an international team including scientists from Western Sydney University and CSIRO has found that younger, regrowing forests are much more capable of taking carbon dioxide out of the air and storing it away than older established forests. In research published in the Proceedings of the National Academy of Sciences of the United States of America (PNAS), the researchers found that younger, actively-growing forests are taking up far more carbon than mature forests around the world.

The findings showed that half of the extra uptake by younger forests is because they are regrowing after previous clearing, and half because longer growing seasons and carbon fertilisation are causing trees to grow faster. The extra potential storage by the world’s young forests is around seven years’ worth of global carbon emissions, demonstrating the benefits that preserving regrowth forests around the world could have in mitigating rising atmospheric carbon dioxide levels and meeting climate targets.

“Large parts of northern Australia, the United States, Europe and Asia have areas of actively-growing forests and mass tree-planting schemes that draw down vast quantities of carbon from the air”, said Professor Ben Smith (opens in a new window), Director of Research at the Hawkesbury Institute for the Environment at Western Sydney University, one of the authors of the study.

“These young forests have a surprising potential to store carbon compared to pristine forests like the Amazon and old-growth tropical forests in Asia,” Ben said. Old forests tend to be more in balance between the uptake of carbon dioxide by growing plant material relative to the releases from respiration, fire and decomposition. While most forests are still able to draw down more carbon than they release, there are many ecosystems where the opposite is true and they may actually release more than they absorb.

This finding demonstrates the importance of combined efforts to reforest and revegetate land in countering the impacts from human-driven emissions from fossil fuels. In Australia, substantial areas of forest and woodland have been cleared in the past for agriculture and grazing.

“Our study casts light on the opportunity to fulfil our national emissions targets, including sinks from native plant revegetation and carbon forestry,” said CSIRO’s Dr Vanessa Haverd, developer of one of the tools used in the study.

Despite their importance as carbon sinks, regrowth forests around the world enjoy far less protection than old growth forests.

“Considering the additional benefits the forests provide, such as for biodiversity, timber industries and ecosystem stability, better regulation as to how these forests are managed for multiple benefits would be helpful,” said Prof Smith.

“Every tree that is grown to maturity will store around a tonne of carbon out of the air, and in conjunction with efforts to reduce carbon emissions and reduce land-clearing, there is significant potential to counter the increasingly-severe effects of a destabilising climate,” said Ben.

The research was published in PNAS (opens in a new window).