The Story of the Understorey: How Rising Carbon Dioxide Changes What’s Under The Trees

25 February 2018 Six years into the EucFACE experiment, Western Sydney University’s research showed that Australian trees can’t take advantage of extra carbon due to a lack of soil phosphorus and that rainfall has bigger effects on forest growth than  elevated carbon dioxide. Now, new research shows that elevated carbon dioxide (CO2) causes significant changes in the diversity of grasses in the forest understorey. Six years into the EucFACE experiment, Western Sydney University’s research showed that Australian trees can’t take advantage of extra carbon due to a lack of soil phosphorus and that rainfall has bigger effects on forest growth than  elevated carbon dioxide. Now, new research shows that elevated carbon dioxide (CO2) causes significant changes in the diversity of grasses in the forest understorey.

In research published in the Journal of Ecology (opens in a new window), scientists showed that understorey plant communities might be more sensitive to higher levels of eCO2 than trees in nutrient-poor soils. Over three years, researchers witnessed changes in the mix of grasses present in the forest with a relative shift towards more cool-climate, higher-nutrient species. The researchers believe that this may be due in part to the advantage that higher CO2 concentrations provides for the growth of these species and partly due to the role that elevated CO2 plays in releasing additional nitrogen from the soils.

check out the early version of our new paper from a rare study on #understory #plantcommunity responses to #CO2 from a #FACE experiment! #EucFACE @JEcology @westsyduhie
Elevated CO2 concentrations reduce C4 cover and decrease diversity of und... https://t.co/vNJgqE0EFv

Scientists divide grasses into two types, termed C3 and C4, which differ in the way they absorb carbon dioxide from the air. C3 grasses tend to favour cooler climates and are often found under trees or shaded places. C4 grasses, however, like sun and warmth and do very well in open spaces exposed to full sunlight.

Grasses and groundcover plants play an important role in how forest ecosystems work, by responding quickly when it rains and turning over soil nutrients rapidly. Their lifespans are measured in years rather than decades or centuries like trees and their ability to respond to changes in CO2 and nutrients is an important signal for how the ecosystem as a whole is changing under elevated CO2.

"We have seen evidence of changes in the composition of the understorey plant community, despite relatively little change in tree growth under elevated CO2”, explains scientist Professor Sally Power.

"These shifts in the understorey community may have other, knock-on impacts on the functioning of this woodland ecosystem in the future, such as changes in nutrient cycling and loss of associated biodiversity; monitoring what’s happening in the understorey tells us a lot about the sensitivity of native woodland ecosystems to predicted increases in atmospheric CO2 concentrations.” 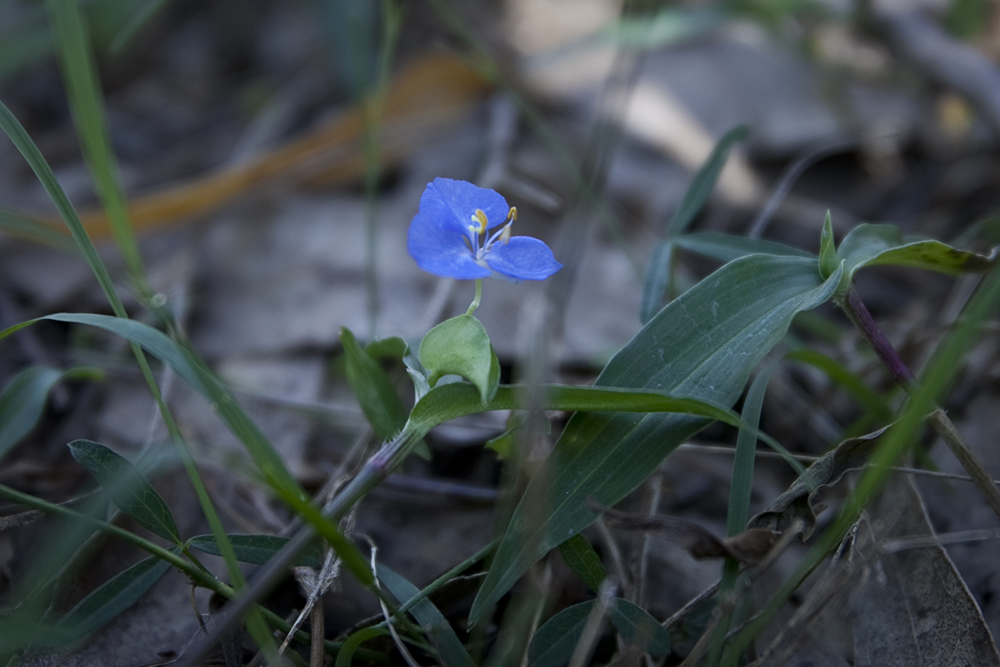 Forbs such as Commelina are relativewly unchanged under the presence of elevated CO2.

These findings demonstrate the varied and often contradictory responses that Australian forests ecosystems reveal under the highest levels of carbon dioxide in millions of years - levels we can expect to reach by 2050.

"With 160 million hectares of eucalypt-based forests in Australia, they are our major carbon sink”, explains Professor Power.

"Understanding responses to rising CO2 at every level of the system – from grasses to trees to soils – is essential and experiments such as EucFACE provide the data that science and policy need to make accurate, well-informed decisions about Australia’s future."