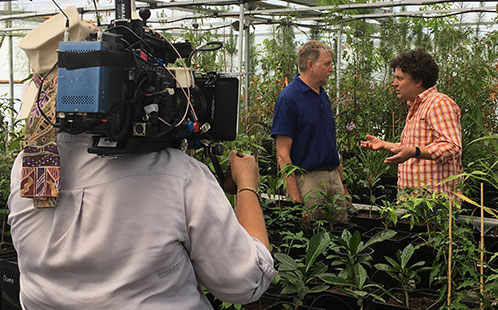 The research trials underway at Western Sydney University’s Hawkesbury campus were showcased this week on popular television program Gardening Australia as host Josh Byrne toured the greenhouse heatwave and drought trials for the Which Plant Where (opens in a new window) project.

The trials are part of five-year project in partnership with Macquarie University and the NSW Office of Environment and Heritage to stress-test common landscape species for their ability to cope with the projected hotter climates facing Australia. Already, the last five summers have smashed new records for heat extremes and duration. This is predicted to heavily impact on our landscapes and gardens at a time when urban green space is desperately needed to provide shade, liveability and cooling for expanding cities.

“We are really seeing some extraordinary heat in Australia and 2018 was the third hottest year on record, a full 1.14 degrees Celsius above average in a year when the El Nino effect was neutral”, said Professor David Ellsworth, Lead Scientist for Western Sydney University for the Which Plant Where project.

“People can retreat to cooler conditions but our plants and trees are forced to deal with high temperatures and the effects of radiant heat from roads and buildings. At a certain point, their internal mechanisms collapse and that’s when you get leaf burns or dieback that can really affect the function and appearance of trees”, he said.

The Which Plant Where uses a combination of modelling and experimental trials to match the natural tolerance of common plants to the regions in which they will still be able to survive and thrive in future climates. The greenhouse tests involve subjecting species to higher average and extremes of heat with drought imposed to find the tipping point where the plant’s physiology is simply overwhelmed by heat. Thermal imaging can detect when plants change colour as their mechanisms stop drawing soil water for cooling and the system collapses.

“Plants have evolved in a wide range of Australian climates and this influences their ability to cope in our landscapes”, said Professor Michelle Leishman, Chief Investigator at Macquarie University for Which Plant Where.

“Our aim is to enable Australians to select the right plant for the right place under a changing climate, backed by thoroughly-tested research so that trees we plant today will thrive when our children grow up”, Professor Leishman said.

The Which Plant Where project featured on ABC Gardening on Friday 15 February 2019 (opens in a new window).