Dr Jonathan Plett from Western Sydney University's Hawkesbury Institute for the Environment has been awarded a 2016 NSW Young Tall Poppy Science Award for his research and engagement on the relationships between plants and the fungi in soils.

With an outstanding publication track record and a passionate commitment to sharing his knowledge with a wide variety of audiences, Dr Plett is one of Australia's most promising young scientists working to secure the world's food and forestry resources. 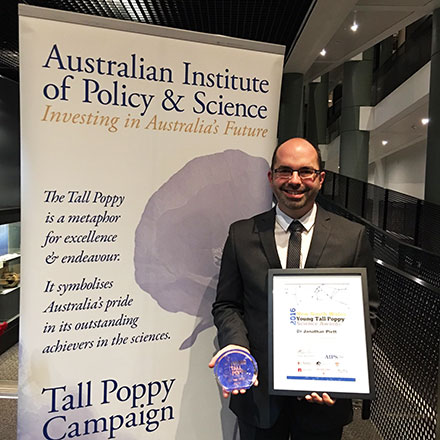 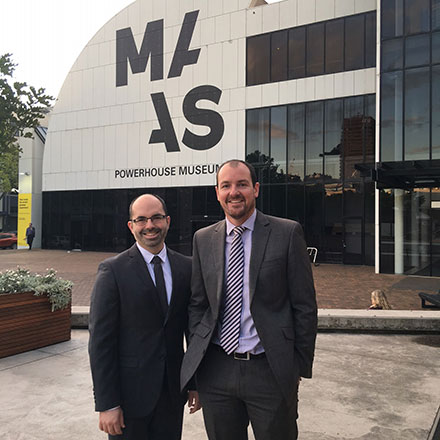 The Young Tall Poppy Awards are issued by the Australian Institute of Policy and Science, and recognise promising young scientists who achieve scientific excellence and demonstrate a commitment to sharing their passion and knowledge.

Since graduating with his PhD six years ago, Dr Plett has built up an enviable record of research into the relationships between plants and the fungi that co-exist on plant roots. Many plants form beneficial relationships with soil fungi, sharing resources and 'communicating' via chemical exchanges that let plants decide whether they are associated with a friendly fungi or a foe.

My research is about strengthening these good-guy relationships so that crops and forests can make better use of the resources in the soil...

Jonathan aims to use the best genetic screening and development tools to breed agricultural crop varieties and forestry species that make the most from these fungal relationships to grow faster, produce more food and produce with lower chemical fertiliser and pesticide inputs.

"There can be millions of organisms in a handful of soil," explains Dr Plett.

"The soil is a silent, secret world of allies and foes, friends and enemies, each vying to make the most from the resources available. Plants team up with good-guy fungi and bacteria to extract more nutrients out of the soil, while other types of fungi and bacteria try to take advantage of plants and live a stronger existence by causing what we see as diseases."

"My research is about strengthening these good-guy relationships so that crops and forests can make better use of the resources in the soil. This has enormous potential in a world of increasingly scarce resources where we face a significant challenge in feeding more than nine billion people by 2050."

Dr Plett's award caps off a number of other high-profile achievements, including an ARC Discovery Early Career Researcher Award, an ARC Discovery research project, and fellowships from the Australian Academy of Sciences and the Grains Research and Development Corporation.

The Hawkesbury Institute for the Environment was recognised in the 2015 Excellence In Research Australia as being well-above world class standard in five disciplines: Soil Sciences, Forestry Sciences, Plant Biology, Ecology and Ecological Applications. The contributions of researchers such as Dr Jonathan let are central to this recognition and reflect a focus on scientific and engagement excellence that is pushing agricultural productivity forward in Australia.

Presented by Dr Alexie Papanicolaou of the Hawkesbury Institute for the Environment (Western Sydney University, Australia), Science in a Cup is a 5 minute interview-style podcast where a scientist explains one word related to science. Sometimes it is a jargon but more often this is a word we use every day but scientists may have a different meaning. More 'Science In A Cup' Podcasts (opens in a new window)