For PhD student Tracey Steinrucken, her graduation on Wednesday 13 December brings to a close three of the most intense and fulfilling years of her life. During her studies at Western Sydney University and CSIRO, Tracey has travelled to the United States as a Fulbright Scholar, represented the Hawkesbury Institute for the Environment (opens in a new window) in its Three Minute Thesis Round, uncovered new insights into the control of woody weeds, and most recently, become a mum to baby Isabelle. 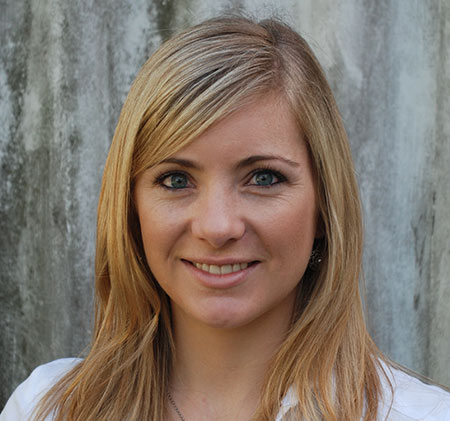 “Looking back on the last three years, I’m not really sure how I fitted it all in!”, explains Tracey.

“The opportunities I have been given through the partnerships and collaborations with Western Sydney University and its partners at CSIRO, the University of California Berkeley and others in the United States have been wonderful for me”, Tracey says.

Tracey has always been a keen sportswoman, growing up in South Africa in a family of sporting champions. Tracey’s mother represented South Africa in gymnastics and her brother, Grant Nel, is a well-known Australian Olympian diver. A keen soccer player from an early age, Tracey values the connections that sport offers and the way that sport is a universal language of friendship and connection all over the world.

Tracey has excelled in opening up opportunities for herself and is a passionate advocate for encouraging children, especially girls, to foster their curiosity for the natural world, sciences and STEM careers. In fact, her PhD project came about as a result of that timeless creator of opportunities – the simple request.

“I asked about available PhD projects in the areas of plant pathology and biological control and it turned out that Dr Rieks Van Klinken at CSIRO Biosecurity on the potential for using fungal controls against the problematic woody weed, Parkinsonia, which covers large areas of Northern Australia. It sounded good to me – South Africa is full of imported, invasive weeds much like Australia. We decided to partner with Associate Professor Jeff Powell (opens in a new window) at the Hawkesbury Institute and Dr Andrew Bissett at CSIRO”, Tracey explains.

Tracey’s research has led to a much-improved understanding of the links between plant dieback and the fungal organisms that affect plants, opening up potential for both actively using fungi to control weeds and understanding how and why fungi cause damage to crop and environmental plants...

Tracey’s research has led to a much-improved understanding of the links between plant dieback and the fungal organisms that affect plants, opening up potential for both actively using fungi to control weeds and understanding how and why fungi cause damage to crop and environmental plants.

“The major impact from my research is a workflow for diagnosing dieback in any plant using conventional fungal research methods coupled with advanced technologies such as genetic sequencing that is being used to identify DNA in environmental, health and agricultural research. This means that we could find new biological control agents for controlling pests and weeds in the future much more efficiently than current traditional methods that take much more time”, Tracey outlines.

Tracey did us proud as one of two successful Fulbright Scholars in 2015 and spent an incredible nine months based at the University of California Berkeley. As well as having access to some of the world’s brightest minds in science, Tracey made the most of being based in California, with trips to Yosemite National Park, the Grand Canyon and the Giant Redwood Forests.

“The Fulbright programs facilitates all kinds of networking and meet-up events that continue to have impact on my professional development to this day”, says Tracey.

“I am a proud ambassador for this life-changing program and for the opportunities for women in science that these kinds of partnerships can create”.

Describing her vision for what might come next in her career, Tracey’s optimism and openness to creating great opportunities is evident.

“As well as my interests in plant pathology and molecular biology, I would also love to do more teaching and explore opportunities in project management and marketing. Down the track, I would love to work directly with growers and land managers to better understand how to solve their problems by connecting them to research and translation. I think that would be a great combination that would build on everything I’ve done at Western Sydney University so far.”

With the rising importance of research impact, Tracey has a bright future ahead in science.

“Life is hectic but I’m enjoying these challenges!”, Tracey says.