Female Lyrebirds Step Into The Spotlight With Their Extraordinary Mimicry

The female Superb Lyrebird of Australia is finally getting her day in the sun. The male is justly famous for his amazing ability to mimic sounds. But for the first time, scientists have conducted a systematic study (opens in a new window) of the sounds that female Superb Lyrebirds make. They find that she, too, is a skilled vocalist that can imitate the voices of at least 19 other bird species. 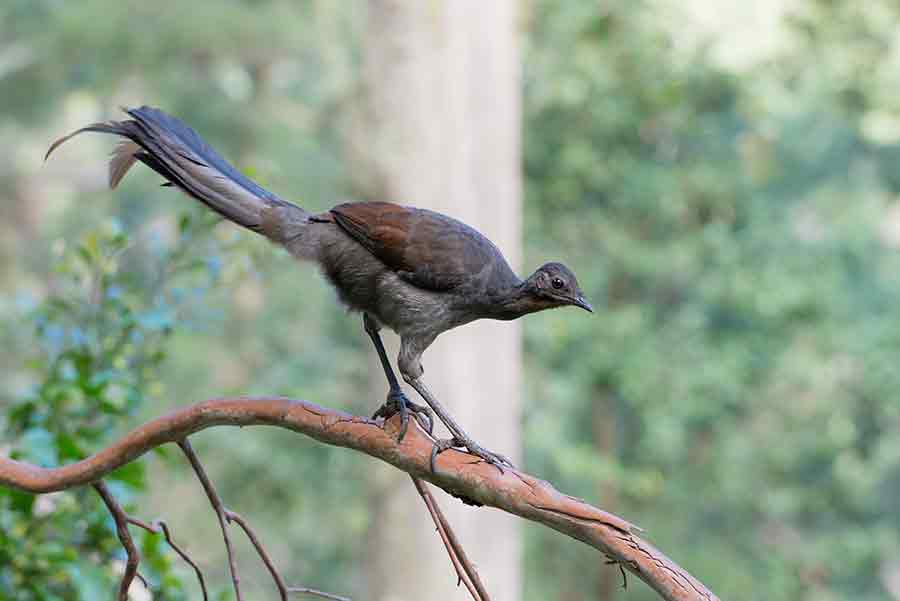 "We've heard females imitate the calls of cockatoos, parrots, hawks, at least one cuckoo, and even the sound of wingbeats," says researcher Anastasia Dalziell from the Cornell Lab of Ornithology. "They are astonishing vocal mimics – it is only because the male is even more ostentatious that the female's abilities have been overlooked."

"We would argue that the importance of vocal mimicry by female birds has historically been neglected," says Justin Welbergen of Western Sydney University. "This has hampered a fuller understanding of why birds sing."

The two researchers published their findings earlier this year in the journal Frontiers in Ecology and Evolution.

This research has
received widespread interest.

It's a field that is wide open. A number of recent studies show that the significance of song in female birds has been underestimated worldwide, across species.

The male's sounds are primarily associated with courtship. He performs a coordinated song and dance routine on display mounds built just for that purpose, arching his long, lacy tail over the grey and warm-brown feathers of his back. He spices it up by imitating the voices of other birds or forest sounds, as illustrated in a classic BBC video narrated by David Attenborough, featuring the vocal talents of some captive lyrebirds.

During the male's courtship display, the female remains silent. But that doesn't mean she has nothing to say. She vocalizes during foraging, when she's defending her young, and possibly for territory defence where the message may be aimed at other females.

The female's "whistle song," sung during foraging, is one of the sounds that may keep other females off her territory. This song, unique to lyrebirds, is a lyrical, eclectic combination of whoops, whistles, squawks, and trills and may sometimes be preceded by imitations of other bird species.

During their study, the researchers found other differences between male and female lyrebird sounds. "The females imitated fewer bird calls than males but performed more imitations of hawks," says Dr Welbergen. "Females vocalized at a lower rate than males, and their lyrebird-specific whistle song tended to be shorter than the male's."

Female lyrebirds also use their “whistle song” to defend territory. It’s similar to the male’s song, but is much shorter.

Females also call while defending their nest from predators—something that males never get the chance to do because they don't help rear the young. When the researchers visited a nest to band a chick, the mother treated them as predators and defended the nest with piercing alarm calls, mimicry, and even physical attacks.

"These alarm calls could be directed toward the predator," explains Dalziell, "or they could be a warning to her chick to hide from the danger."

At this early stage in the research, it's not yet clear whether the calls of female Superb Lyrebird affect their nesting success. But the new research finally recognizes female Superb Lyrebirds as gifted vocalists in their own right. With future work, the authors hope to understand the meanings of the females' calls. Dalziell and Welbergen are back in the field right now, where, they report, "the lyrebirds are singing in earnest!".

Females may use their alarm calls to drive off predators or to warn their chicks to hide.

This article was originally published on the Cornell Lab Of Ornithology's All About Birds (opens in a new window) website with text by Pat Leonard.