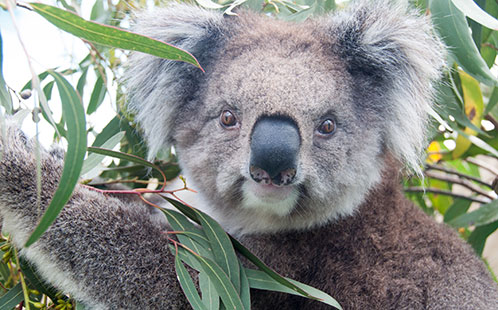 World-first research, led by Dr Michaela Blyton, now at the University of Queensland and Dr Ben Moore from Western Sydney University’s Hawkesbury Institute for the Environment, has found faecal transplants can safeguard the future of koalas and help them adapt to new food sources, leading to a potential solution for relocating koalas between populations.

In the study, koalas from highly nutritious and palatable Manna Gum (Eucalyptus viminalis) forests were inoculated with faecal matter from koalas that routinely fed on less nutritious, and generally avoided, Messmate Stringybark eucalypts (Eucalyptus obliqua). The results show that the gut microbiomes of the treated koalas over time became more similar to those of the Messmate koalas, helping them to adapt to a Messmate diet and expanding the food sources available to them.

According to Dr Ben Moore, the experiment is the first time faecal inoculation has been tested in koalas and the results were more successful than anticipated.

“We know different koalas prefer different species of eucalypts and can starve if their preferred food tree isn’t available. Koalas might appear to be fussy eaters, but for many reasons, koalas are not always able to adapt to different food sources on their own which can result in devastating consequences.”

Koalas often struggle to find the food they need. Forest degradation continues to limit the food trees available and in areas of overpopulation, koalas compete with one another for the same food source. These factors are contributing to a dramatic decline in some koala populations and increasing the need for relocation from others.

“Faecal inoculations that enable koalas to adapt to specific species of eucalypts have wide applications for koala conservation. Koalas throughout Australia are threatened by Chlamydia, and treatment for this disease is with antibiotics, which damage the koalas’ gut microbiome. Our study shows that after treatment koalas would be better able to recover, to make most of the food trees available to them, or better adjust to new areas of forest,” said Dr Moore.

Further research is planned to refine the faecal inoculation capsules and to explore additional applications in koalas.

The research is published in Animal Microbiome.(opens in a new window)

Dr Ben Moore's research was featured in Issue 3 of the Future Makers magazine: find out more... (opens in a new window)