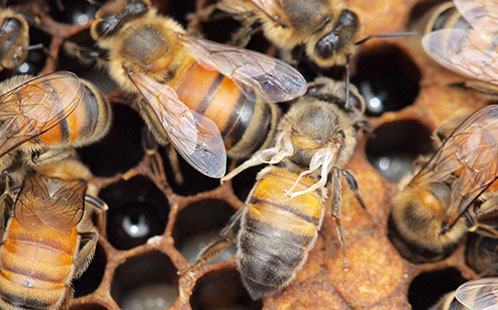 Parasitic Varroa mites magnify the damage from a common virus in honeybees that can cause deformities in the bees’ wings, according to a review published in the Annual Review of Virology. The virus is not presently in Australia but overseas, the spread of Varroa mites has brought much higher levels of Deformed Wing Virus (DWV) to honeybee colonies. This means that keeping Australia free from Varroa mites is even more crucial.

Researcher Dr Laura Brettell from Western Sydney University’s Hawkesbury Institute for the Environment, (opens in a new window) along with Prof Stephen Martin from the University of Salford, reviewed the current knowledge about Deformed Wing Virus (DWV) and its interactions with bees and the Varroa mite. Australia is currently one of the last remaining countries in the world still free of Varroa, which is why it is so important to manage biosecurity properly for the health of our bees.

“Deformed Wing Virus is the most common virus found in bees and can result in mass deaths of bee colonies. It is estimated to be found in about half of all honeybee colonies internationally”, said Dr Brettell.

“DWV was once a fairly minor honeybee virus but with the rise of Varroa infestation, it has spread across the world. Varroa mites are not only damaging to honeybees directly, but also exceptionally efficient transmitters of viruses like DWV”, she said.

There is increasing evidence that viruses like DWV can also be carried by a much wider variety of invertebrates than just honeybees, with studies having shown detectable levels of DWV in 65 arthropod species including some Arachnids (spiders and mites). How these organisms interact with, and maintain or transmit DWV back to honeybees remains the subject of significant international research.

There is, however, a consistent relationship between DWV infections, Varroa mite damage and with the characteristic deformed or shrunken wings that can cause the death of honeybees.

Part of this research is underway at Western Sydney University where the pollination science team is assessing virus prevalence in Australia’s most common native bee species. These are widely believed to contribute significantly to pollination of our crops and wild plants, but very little is known about which species carry viruses and whether native bees can transmit viruses to honeybees or vice-versa.

“The Hort Frontiers -funded pollination research program underway at the Hawkesbury Institute aims to provide insights into the current state of native and exotic pollinators and prepare for a future where European Honeybees might be adversely affected by viruses or pests”, said Professor James Cook, Lead Scientist of HIE’s Pollination Science program.

“The best option for honeybees is to prevent pests and diseases like Varroa from entering Australia. However, we also need to better understand our native pollinators and use effective science to be ready for a future that may become more reliant on pollinators other than European Honeybees”, James said.

“Deformed Wing Virus In Honeybees and Other Insects” (opens in a new window) is published in the Annual Review of Virology.