‘Back in time for dinner’ at Western Sydney University 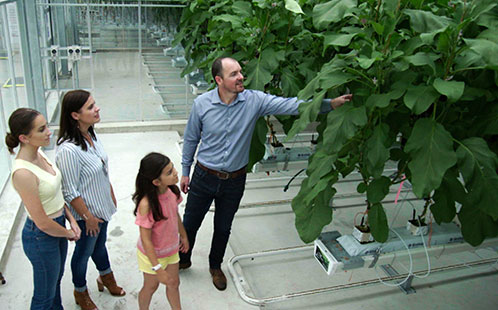 The impressive $7 million, 1800sqm Glasshouse facility at Western Sydney University’s Hawkesbury campus will feature in the final episode of the ABC’s Back In Time For Dinner program on Tuesday, 10 July at 8.30pm.

The research facility, launched in 2017 as part of Australia’s first National Vegetable Protected Cropping Centre, is a joint initiative between Hort Innovation and Western Sydney University.

“The University, together with Hort Innovation, established the Glasshouse to provide a best-in-class facility that will teach farmers of the future, equipping them with the environmental knowledge they’ll need to succeed,” said Professor Ian Anderson, Director of the National Vegetable Protected Cropping Centre and the Hawkesbury Institute for the Environment (HIE).

“In its first year, the glasshouse delivered above all expectations, producing more than 3.5 tonnes of perfect quality produce – an impressive yield of up to 150 kilograms of produce per square metre – that included capsicums, cucumbers and eggplants.”

The episode will follow the journey of a family as they visit some of Sydney’s best-known food and history landmarks, and meet some of the greats of Australian history including Dawn Fraser, Stephanie Alexander and Matt Moran. The uniting theme in all their experiences has been food and its place in Australian family life and culture.

As a location for the filming, Western Sydney University’s glasshouse captures the vision of the future theme in the final episode of the program, and represents the future of horticultural research, training and education in Australia and beyond.

“It was a personal privilege to demonstrate how Western Sydney University is driving the next phase of food production for a rapidly-growing population,” said Professor Anderson.

The final episode screens on ABC and iView on Tuesday 10th July 8.30 and again on Sunday 15 July at 6.00pm. Please visit www.westernsydney.edu.au/nvpcc (opens in a new window) for more on the Glasshouse.