The emblematic and endemic emu (Dromaius novaehollandiae) occurs throughout a wide range of habitats across the Australian continent, moving nomadically to areas of periodically high food availability and high rainfall events. Their numbers can greatly fluctuate regionally, both seasonally and annually and their clutches are high variable, producing many or few young each season. However, very little is known about their mating system or reproductive strategies in the wild. Socially monogamous pairs of emus are seen throughout the year, however females will often mate sequentially and simultaneously with multiple males in a season (a polyandrous mating system), resulting in clutches of both mixed paternity and maternity. The male bears the sole responsibility for incubation and the rearing of chicks; an uncommon trait in birds, particularly in a system where the male has low paternity assurance

The aim of this study is to elucidate what factors affect the male’s reproductive success in this uncommon male only parental care system. In attempt to better understand this, I aim to answer the following questions;

1) Are male emus face with a trade-off between mating with multiple females and the successful incubation his clutch?
2) Does clutch size effect hatchability and offspring fitness? Does this influence male mating strategies?
3) Does resource quality effect female investment in egg size and composition?

Finally, I will look at recruitment success and the likelihood of emus continuing to persist in the east of Australia, where their numbers appearing to be decreasing (despite their ability to produce many young per season). Through the monitoring of the reproductive success and population numbers of several east coast populations, I will be conducting species distribution modelling and population viability models to make recommendations of management needs for these emu populations. 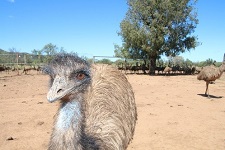 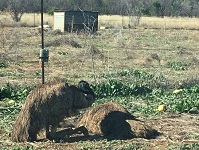 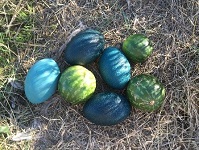 Ryeland J, Derham TT, Spencer RJ, (2021) 'Past and future potential range changes in one of the last large vertebrates of the Australian continent, the emu Dromaius novaehollandiae', Scientific Reports, vol.11, Article no.851