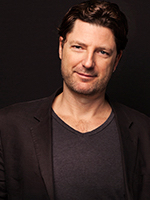 Institute for Culture and Society
School of Humanities and Communication Arts
j.salazar@westernsydney.edu.au

Juan Francisco Salazar is an anthropologist and media scholar and practitioner. He is a Professor in Media Arts and Production in the School of Humanities and Communication Arts (HCA) and a member of the Institute for Culture and Society.

Juan’s research, teaching and creative practice is in environmental humanities; socio-ecological change; documentary cinema; futures studies; and cultural research in Antarctica and Antarctic gateway cities. He is one of only a handful of researchers to have conducted ethnographic fieldwork in Antarctica. Juan’s work is concerned with the relational dynamics of socio-ecological change in urban contexts and with human settlements in extreme environments. For many years he has developed transdisciplinary collaborations with visual artists, filmmakers, performance artists, scientific and environmental journalists, Indigenous activists, microbiologists, glaciologists and ecologists, working internationally across the university sector as well as the government, industry and not-for-profit sectors.

"We are living through a momentous time of abrupt change at unprecedented scales, and creating a series of unseen predicaments that we might only be able to respond to through meaningful interdisciplinary and transdisciplinary research”, Juan says. “We must advance high-impact transdisciplinary research that allows us to transform global governance of social-ecological systems and allows us to rethink what environmental justice really means in the 21st century.”

Juan’s award-winning documentary film Nightfall on Gaia (2015); which he shot in Antarctica and brings together science, speculative fiction, documentary and video art; has been screened internationally at cinemas, film festivals and conferences in more than 20 cities around the world. In 2017 he was the principal convener of the highly praised international Knowledge/Culture/Ecologies Conference in Chile which brought together more than 350 participants from 30 countries.

Juan completed both a PhD and a Master of Arts degree at Western Sydney University after moving to Australia from Chile in 1998, where he worked as an environmental anthropologist for the Chilean government and several environmental non-governmental organisations.

During 2018, Juan is co-convening the new Sydney Environmental Humanities Lecture Series at the Australian Museum and developing, with Dr Tanya Notley (HCA), a new student exchange program to Vanuatu focusing on sustainable development, climate change, and resilience in the South Pacific.

As a Research Theme Champion for Environment and Sustainability, Juan aims to focus on developing a new institutional framework for sustainability research within the University. This includes developing a strategic framework for collaborative research with government and industry, which aims to allow early career and established researchers from a range of Schools, Institutes and Centres to work together to address the big research challenges.