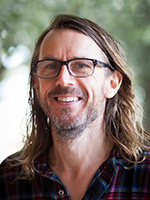 Institute for Culture and Society
d.mcneill@westernsydney.edu.au

Donald McNeill is Professor of Urban and Cultural Geography in the Institute for Culture and Society. He works at the intersection of human geography, economic sociology, spatial planning, urban design and architecture, with a particular focus on political and cultural economies of globalisation and cities. In 2017, he published Global Cities and Urban Theory (Sage), an exploration of how cities achieve global status, which gathered many of his ideas on architecture and urban space.

Professor McNeill joined Western Sydney University in 2007, having previously held faculty positions at King's College London, Southampton and Strathclyde. He is now a Research Theme Champion for Urban Living Futures and Society at the University, where he supports the development of cross-disciplinary research teams. Donald is also a member of the Australian Research Council College of Experts, and chairman of the Urban Studies Foundation.

Donald also works in the field of urban innovation and smart cities. His ARC Future Fellowship, Governing Digital Cities (2012-2016), examined the nature of the digital economy in several cities around the world. “We focused on cities that emulate Silicon Valley,” Donald explains. “The project charts the growing interest that firms such as IBM, Microsoft, Intel and Cisco have in urban governance and service provision, and how they envision urban futures.”

Another of Donald’s collaborative research projects delved into the future of Sydney's Chinatown and its transformation in the 21st century, and how it may have been impacted by changes due to fast globalisation over the past few decades. The project involved a large survey and interviews with businesses in Chinatown to examine the operations and networks within and beyond Chinatown, particularly in China and Asia more broadly. It explored the significance of Chinatown's culture and heritage to different social groups by taking an in-depth look at some of the City of Sydney's plans. As well as looking closely at the planning, staging and choreography of the annual Chinese New Year Festival, it investigated the organisational politics between the different participant groups and how the event contributes to relations between Australia and China.

Donald is currently investigating Australia's digital economy, and is exploring technology parks, venture capital, start-up ecologies, and the readiness of government to engage with high technology sectors. Two PhD students are working with him on his research into governing global cities, with one looking at social enterprise incubators in Cape Town while the other is investigating digital currencies.