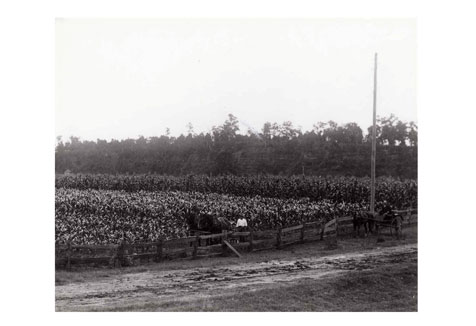 How the Hawkesbury Agricultural College acquired the Riverfarm

Scroll through the image gallery and listen to the audio recording for Chapter Five of 'Dreaming on the Riverfarm - Stories from the Hawkesbury'.

Benjamin Richards opened a butcher shop in Richmond in 1837 and in Sydney in 1847. He acquired large grazing runs gradually expanding the business to provide meat for the Sydney market.

Richards died in 1898 in the home he built for his family in Richmond, formally known as Kamilaroi, bequeathing the house and Richmond farm to his daughter, Elvina Durham.

Elvina Durham lived at Kamilaroi in 1896 and in 1900 Mr Hough was managing the Richmond Lowlands property. The season’s crop looked promising and a good maize yield was predicted. Potatoes and melons were also being grown on the lowlands. Elvina Durham leased the farm to the Crown on 8 June 1905.

Between 1891 and 1908 Hawkesbury Agricultural College was administered a section of Crown land from the NSW Department of Mines and Agriculture. Work commenced by the first students involved clearing and fencing of paddocks for grazing and cultivation and construction of dams. The principle Henry William Potts acquired the Riverfarm by lease in 1904 for growing crops enhancing the feed necessary to produce ‘’studs of high quality poultry, sheep, pigs, cattle and horses’’.

A year after the farm was in operation plans were made in 1909 to construct a large water tower to provide water to the Riverfarm, as well as the college and the Richmond Township. In 1921 a large scale ‘maize-breeding experiment’ was undertaken involving Chemists from the college testing the soil quality enhancing the productivity of the farm. It was considered the most fertile farms on the Hawkesbury River at the time.