This year there were joint winners of the Women of the West Award, with the judges recognising the achievements and dedication of both Aunty Mae Robinson from Mt Pritchard and Sister Kerry MacDermott from Minto, awarding each the title of 'Woman of the West' for 2010.

Aunty Mae Robinson, an Aboriginal Elder and long term resident of Mt Pritchard, was recognised for contributions to the education and wellbeing of Indigenous peoples.  Aunty Mae was nominated by Anne McLean, Manager, Schools Engagement.

For more than 30 years Aunty Mae has made substantial and far reaching contributions to education and community life in New South Wales, Sydney and most particularly, Greater Western Sydney. Aunty Mae's own journey is remarkable as she is part of the Stolen Generation.

In the early 1980s, as a mature aged student and mother, Aunty Mae became the first Aboriginal student to study and graduate from the School of Education at the Milperra College of Advanced Education (which later became part of Western Sydney University).

Aunty Mae taught in Greater Western Sydney primary schools and was appointed to Education Officer and Consultant positions within the NSW Department of Education and Training. Aunty Mae has dedicated her personal and professional life to empowering others and improving the lives of the disadvantaged in South Western Sydney.

Now retired, Aunty Mae continues to consult with local Aboriginal communities and is an advocate for the value of education as a transformative force.

Aunty Mae has made a significant difference through education and is considered a connector of cultures, recognised for her drive and passion.

Sister Kerry MacDermott, a resident of Minto and member of the Religious Community of Our Lady's Nurses for the Poor, was similarly recognised for her advocacy for Indigenous people.  Sister Kerry was nominated by Chris Hayes MP, Member for Werriwa.

Sr Kerry is an active and compelling campaigner for Reconciliation between Indigenous and non-Indigenous communities. For 26 years, Sr Kerry has worked to build mutual respect and improve understanding in the Minto community and is a founding member of the Winga Myamly Reconciliation Group.  Through this group and their activities held throughout the year, Sister Kerry aims to bring people together in remembrance, in the hope of paving a way towards mutual respect and improved understanding between Indigenous and non-Indigenous communities. Prue Gregory, is the Principal Solicitor at Macarthur Legal Centre in Campbelltown and was nominated by Jan Nicoll of Macquarie Fields.

Prue works tirelessly on improving access to justice for socially and economically disadvantaged people in the West.  At her commencement of employment at the Macarthur Legal Centre, there were only three outreach services being provided within the community, in a matter of months the number of outreach services increased to eight.

Prue has worked across a number of public housing estates including Claymore and Macquarie Fields, and provides a strong professional service of advice and advocacy to social housing clients who reside within areas of high need and relative isolation.

As stated in a testimonial by Chris Hayes MP, Member for Werriwa, "Any professional can provide a service, but it is the compassion, commitment and genuine love for her community that sets Prue aside". 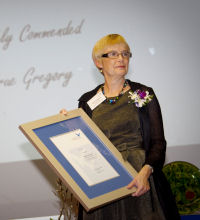 Yvonne de Vries is an Occupational Therapist and a Seating and Positioning Consultant with the Megalong Positioning Service (MPS) in Leura. She was nominated by her Manager, Wim Hartog.

Inspired by the standard mobility equipment which was readily available overseas, Yvonne spent the late 1980's working with a small team to create and manufacture innovative mobility solutions to support the needs of the children and young adults she worked with.  She also sought sponsorship to finance a mobile workshop service that now travels all over New South Wales.

In 2001, Yvonne won a major award sponsored by the Institution of Engineers, Australia for her design of a turtle-shaped floor seat which allows disabled children to sit amongst mainstream children.

Through her passion for her profession, and her dedicated and innovative approach, Yvonne has opened up the worlds of many adults and children with disabilities and given them the opportunity to participate and be part of their community.

Robyn is the Director of the Next Level Generation Performing Arts Company (NLG) based in Parramatta.  Robyn was nominated by Dianne Aboud, a long time friend and volunteer.

Robyn established NLG in 2003, in response to the need for youth to express their creativity productively, rather than loitering aimlessly around shopping centres.

The Next Level Generation Performing Arts Company performs free for many Charity Organisations and Schools.  Robyn has been recognised for her community and humanitarian work and was made a United Peace Federation 'Ambassador of Peace' in 2008.

Faten was nominated by Julie Owens MP, Member for Parramatta.

Faten is regarded as a remarkable person with many talents.  Faten is a qualified nurse and midwife, teacher of English as a second language, community radio broadcaster and President of the Muslim Women Welfare Australia.  Faten has played an important role in the Muslim community promoting health and education campaigns. Michelle was nominated for the Young Women of the West Award by Councillor Judith Hannan. Michelle is a resident of the Macarthur area and has been a journalist with the Wollondilly Advertiser since 2006.

Michelle is regarded as an outstanding journalist who is passionate about the issues affecting the Greater Western Sydney, and has demonstrated outstanding community contribution and leadership.

Community and charity work undertaken by Michelle includes taking part in a swim-a-thons to raise funds to support local families affected by bushfires, organising events to raise funds for people in need, working to raise money for Careflight and campaigning for road safety awareness.

Of all the causes and charities Michelle is involved in, Cystic Fibrosis (CF) is closest to her heart and in 2009, Michelle organised a swim-a-thon for this cause and raised $36,000.  The same event was held again recently this year and she raised $50,000.

Michelle has used her skills as a journalist to generate positive change and outcomes for her community.

A resident of Bonnyrigg Heights, Tarsha was nominated for the Young Women of the West Award by her father Paul Gavin.

In 2009, Tarsha co-organised the 'Everybody Belongs' Conference that saw young Spanish-Latin American people from Fairfield and Liverpool undertake workshops and creative activities that promoted cultural diversity, anti-discrimination and acceptance.

Congratulations to everyone from across Greater Western Sydney nominated for the 2010 Women of the West Award: