Winner of the 2011 Women of the West Award

Helen is a doctor with the Western Local Health Network and Allowah Children’s Hospital. Helen  was nominated by Dr Elizabeth McCusker (recipient of UWS Women of the West Award in 2007).

Since 1985, Helen has worked in the Western Sydney area and has advocated tirelessly for improved access to health care services for people with disabilities.

Helen is acknowledged as being one of the first doctors to recognise the importance of developing a comprehensive transition care program, when the care of children is transferred to adult health services.  Helen was instrumental in establishing a multidisciplinary clinic both at the Children’s Hospital Westmead and Westmead Hospital, for severely physically and intellectually disabled children and adults.

Helen has persuaded and inspired specialist doctors and allied health professionals to work primarily in the multidisciplinary clinics and lobbied for clinical nurse consultant positions.  Helen’s dedicated service to intellectually disabled people is a leading model of care in this challenging and generally neglected field. 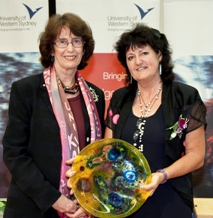 Hanan Dover, a resident of Bankstown was nominated by Betsy Marks, Principal Executive Officer at UWS.  Hanan was nominated for exemplary community service, and her commitment to improving Muslim communities in Greater Western Sydney. A graduate of UWS, Hanan holds a Bachelor of Social Science (Psychology) and Postgraduate degrees in Psychology.

Hanan founded the not for profit community organisation - Mission of Hope, with a focus on health and community development, and bringing together Muslim and non-Muslim communities.  As well, Hanan pioneered and manages PsychCentral, a psychological and counselling service at seven locations across Greater Western Sydney.

Debbie is the CEO of the youth drug and alcohol prevention charity Youth Solutions.  A resident of Harrington Park, Debbie was nominated by Jan Nicoll, Winner of the UWS Women of the West Award in 2009.

Debbie has been an active member of the Macarthur community for many years.  She has been involved in a number of charity works and community programs.

Also a president of the Rotary Club of Narellan, Debbie has been a member of the club for more than five years.  Through her work as a Rotarian, she has volunteered in the Rotary Village Aide Program in the Philippines. 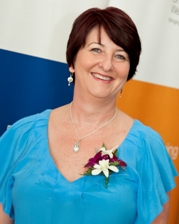 A resident of Granville, Najeeba was nominated by a friend and colleague Ahmad Jafari.  Najeeba is recognised for her work in not-for-profit organisations including the Bamiyan Association and Amnesty International, raising awareness of the plight of refugees and providing tutoring and support for Afghani people in Greater Western Sydney.

Arriving in Australia as a refugee from Afghanisation at the age of  12,  Najeeba was determined to gain an education.  She completed a Bachelor of Medical Science at the University of Western Sydney and graduated in 2010.

Najeeba is recognised for courage in repeatedly sharing her experiences in Afghanistan, and promoting the rights of asylum seekers and refugees in Australia. 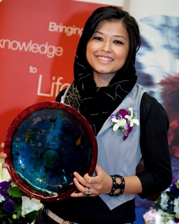 Nominees for UWS Women of the West 2011

For further information on the UWS Women of the West Award please contact the Office of Public Affairs on 9678 7512.