Origin of the universe 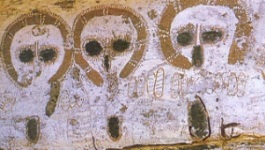 Anthropologist, W.H. Stanner (1979) probably gives the best explanation of the origin of the universe from an Aboriginal perspective. According to him:

"The Australian Aborigines' outlook on the universe and man is shaped by a remarkable conception, which Spencer and Gillen [1899] immortalised as 'the dreamtime' or Alcheringa of the Arunta or Aranda tribe…Some anthropologists have called it the Eternal Dream Time. I prefer to call it what many Aborigines call it in English: The Dreaming or just, Dreaming. A central meaning of The Dreaming is that of a sacred, heroic time log ago when man and nature came to be as they are; but neither 'time' nor 'history' as we understand them is involved in this meaning...One cannot 'fix' the Dreaming in time: it was, and is, everywhen". The translation of the meaning of 'Alcheringa' into English does not do justice to its real and inner meaning for Aboriginal and Torres Strait Islander people.

Wandjuk Marika, the well known artist and former Chairman of the Aboriginal Arts Board calls it the Dreamtime rather than the Dreaming. He notes that for the Aboriginal people 'their cultural self is inextricably bound up with their stories and legends, in which the past becomes present, and the Dreamtime exists once again'. He also notes that, 'Today we want to stand by ourselves, live on our land in accordance with our own beliefs and traditional ways, determine our own future' (see Parker, 1978).

To Silas Roberts, the first Chairman of the Northern Land Council, 'Aboriginals have a special connection with everything that is natural. Aboriginals see themselves as part of nature. We see all things natural as part of us. All things on Earth we see as part human. This is told through the ideas of dreaming. By dreaming we mean the belief that long ago these creatures started human society' (see Roberts, in Neidjie, Davis and Fox, 1985). The observer and the observed are the same.

Note: Stanner gave the 1968 ABC's Boyer Lectures in which he told the wider Australian community about the 'great Australian silence', the facts about Aboriginal dispossession. It is a book that should be read by all Australian university students, academics and members of the public.