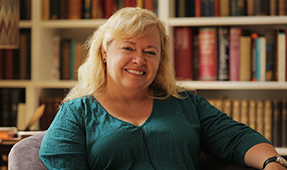 Hannah Dahlen is a Professor of Midwifery and Higher Degree Research Director in the School of Nursing and Midwifery at Western Sydney University. Hannah has had national and international success with grants, and has published more than 100 papers and presented papers at over 100 conferences and seminars with half of these being invited keynote addresses. Hannah is one of the top ranking Western Sydney authors for The Conversation, has been cited in the media over 1000 times and has been a part of three documentary films. In November 2012, she was named in the Sydney Morning Herald’s list of 100 ‘people who change our city for the better’. Hannah is still a practising midwife and works in a private group practice in Sydney, and currently supervises Honours and Higher Degree Research students.

When did you start working at Western and what was your first role?

I started as the Associate Professor of Midwifery at Western in 2008 after a 20 year career as a midwife working in hospitals. I never thought I wanted to be an academic but I really fell into it and I have not looked back. I thought I would be here a couple of years and then move on but next year will be my 10th year here and I am very happy. I was promoted to Professor in 2012.

Describe your current job/role in 100 words or less:

My role is made up mostly of research. I am the Higher Degree Research Director in the School of Nursing and Midwifery, and I also supervise around 11 Higher Degree Research (HDR) and Honours students. I still teach which I love as well, and also still practice as a midwife and was one of the first Endorsed Midwives in NSW.

What’s the best thing about your job?

I have the best job in the world. When I was little my mother quickly worked out that if I got bored there would be trouble. “Keep Hannah occupied and the world will be safe” she would say. I am so lucky to be in a role where I am happily occupied undertaking exciting research, supervising the next lot of research leaders, teaching, getting involved in politics and activism, and also still keeping my hand in clinically by ‘catching babies’ as a midwife. I also speak around the world on my research and the highlight for me in 2017 was speaking at the Human Rights in Childbirth conference in India. My eyes were opened to the invisibility of women in so many parts of the world. In 2017, I spoke at over 20 conferences in five countries and four Australian States. My travel bag is never really fully unpacked. I work in a wonderful School where I am trusted to get on with my work and always supported with my ideas and passions. Working in a place where the culture is a ‘yes’ culture and not a ‘no’ culture means everything to me. I have a wonderful Dean and the best colleagues. I think I would turn up to work even if I was not paid, but don’t tell anyone that!

What do you love most about working at Western?

I really love the colleagues I work with and the freedom and respect to just get on with my job. I love that we have so many students at Western that are first in family to ever go to university. Every day I know I make a difference and that is the secret to a fulfilled life. Western is a young and hungry University, and this means there is no apathy or sense of entitlement. When my daughter was deciding on which university to go to, I did not want to pressure her to come to my university and she really had her eye on one of the impressive sandstone universities. She got an early offer to one of the leading universities but came away feeling they were not really interested or excited about what they did. I convinced her to come to Course Decision Day at Western and she walked away saying, “this is what was missing and where I want to be”. She has loved every moment of her degree.

What are you going to be working on in the next 12 months?

I have so many plans for the next 12 months that I probably need 24 months to undertake them all. Besides the papers, grants and teaching, I will be finishing off editing the textbook midwives use for training both in Australia and New Zealand. But what I am really excited about is a book we are writing based on all the wonderful research being undertaken by our team on human rights and childbirth, and why some women choose to avoid mainstream maternity care around the world. It is called The Canary in the Coalmine, and I am so excited about this project.

I think the lesson I have finally learned in life is be true to yourself and underpin that truth with evidence, compassion and purpose, and doors will open everywhere. This has got me further than any career planning ever did and it is what makes life truly fun!