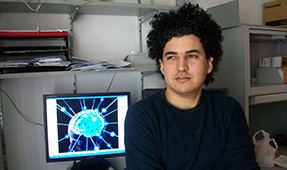 Graduating from Cairo University with a Bachelor’s degree in Mathematics and Computer Science, Ahmed has spent almost 10 years in the U.S. (University of Louisiana, University of Arizona, and Rutgers University) conducting computational and neuropsychological studies of schizophrenia and parkinson’s disease, and later working on collaborative projects on depression and post-traumatic stress disorder (PTSD). Ahmed joined Western Sydney University in 2012, and is now teaching and conducting research in the field of cognitive and clinical neuropsychology, with a focus on drug addiction. One of his research goals is to understand how changes in cognitive function (such as working memory, learning, memory, attention, and language) relate to psychometric measures (such as personality, intelligence, and quality of life) in patients with brain disorders.

How long have you worked at Western and what’s the best thing about working here?

Since January 2012 and before then I was living in the U.S. The decision to move from the U.S. to Australia was quite difficult but, overall, life is good here.

The best thing about working here for me is student supervision. I learn a lot from Masters and PhD students; they became so knowledgeable that I now ask them about new things in our field of research.

Which campus are you based on?

Bankstown, but I often visit Parramatta and Penrith campuses for teaching and meetings.

What is your favourite place on one of the Western campuses and why?

My favourite place is the Bankstown Library. Staff there are super helpful and friendly, and I use multiple resources there to write my books.

When you’re not at work, what will we find you doing?

As a child, what did you want to be when you grew up?

I wanted to study business and commerce like my older cousin, but after high school I ended up studying mathematics and computer science.

What was your first job?

Lecturer at Cairo University. I was teaching computer science classes. The first time I taught a class then was nerve racking. Now, it is a bit easier.

What has been your greatest success?

Publishing the following book on computational neuroscience this year. Many people have helped me make this happen.

If you could go to just one country in the world for a vacation, which country would it be and why?

Mexico. It has amazing culture, history, food, and people.

What is your favourite book, movie and/or album?

If you could invite anyone to dinner who would it be and why?

My sisters, Rasha and Marwa. They live in Egypt and I have not seen them for a long time.