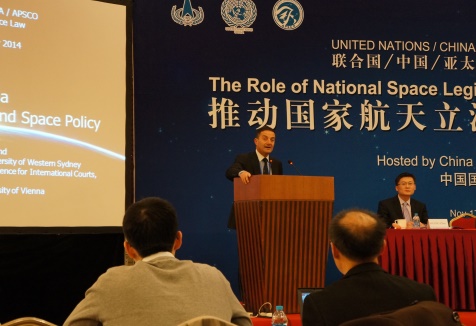 We know satellites are up there, circling the globe, capturing data and taking images, but how much thought do you give to the governance of these satellites?

From his office on the UWS Parramatta campus, Steven Freeland, a Professor of International Law and expert in Space Law, comments on Space Law policy, including the Satellite Utilisation Policy, which sets out the guidelines for Australia regarding the use of space in the coming decades.

Steven points out that, like many countries, Australia is highly dependent on satellite technology for virtually every major activity, including weather forecasting, internet services, communications services, GPS, and satellite television. "Australia also has some unique concerns, particularly regarding security issues, disaster management and the huge coastline of the country," he explains. "Thus it requires access to many differing aspects of satellite capacity on a continual basis."

Steven was recently asked by the United Nations to present at a workshop on Space Law in China. At the workshop, he presented on 'Australia: National Space Law and Space Policy' and 'Small Satellites: Regulatory Requirements and Challenges'.

"Many countries are currently in the process of developing their national space laws and are therefore interested in the Australian experience, given that our domestic space law is quite complex and, at the time it was introduced in 1998, quite innovative," says Steven. "My presentation on small satellites was of particular interest to the delegations from the developing countries. Small satellite technology will, in my opinion, represent a huge step forward in our ability to further utilise the incredible benefits that peaceful use of outer space can offer. In particular, it enables less developed countries to develop space capacity and capabilities as well as garner the benefits of doing so."

Over the past 12 years, Steven has taught Space Law at universities in Australia, Asia and Europe and, in 2015, will be presenting courses at two universities in Beijing, as well as in Ethiopia and Malaysia. He is also involved in some leading international organisations involved in space law and policy, being a Director of the International Institute of Space Law based in Paris, a member of the Space Law Committee of the International Law Association based in London, and a faculty member of the London Institute of Space Policy and Law. From 1 January this year, Steven has also been appointed to the Advisory Board of the Australian Centre for Space Engineering Research.