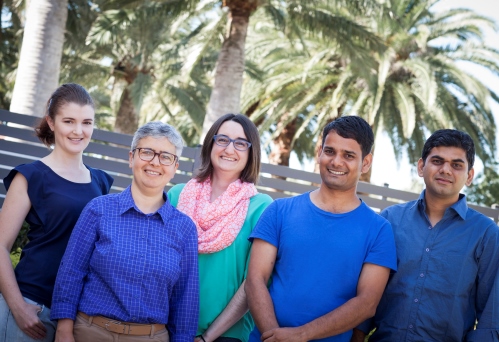 Researchers from the Hawkesbury Institute for the Environment (HIE) are working as part of the ARC Centre for Excellence for Translational Photosynthesis (CETP) to improve crop productivity and close the gap between current rates of food production and increasing global food demands, with particular focus on rice, wheat and sorghum. The CETP brings together world leaders in photosynthetic research from UWS, ANU, University of Sydney, University of Queensland, CSIRO, and the International Rice Research Institute.

Photosynthesis is the process by which plants convert sunlight, air and water into sugars, and ultimately biomass and grain yield. Photosynthetic capacity is a key target for crop improvement as it determines the maximal potential for biomass and food production. With the challenges of population growth and global climate change, the CETP is seeking to find new ways to improve the efficiency of photosynthesis, and translate new photosynthetic discoveries – such as new technologies and advances in photosynthesis research – into enhanced resource efficiency and increased crop yield in the field.

The UWS node of the research project is led by Dr Oula Ghannoum. Dr Ghannoum is internationally recognised for her innovative research on C4 photosynthesis, which evolved around 30 million years ago from ancestral C3 photosynthesis. C4 grasses such as maize, sugarcane, sorghum and millets are important crops and pastures. Discoveries made by Dr Ghannoum are integral to the theoretical framework proposed by the CETP for improving photosynthesis. In particular, Dr Ghannoum established that the key photosynthetic enzyme Rubisco is catalytically diverse in C4 plants and underpins the variation in nitrogen use efficiency among C4 plants.

"Research at the UWS node of the CETP focuses on the molecular and environmental regulation of C4 photosynthesis using natural and genetically altered C4 plants," explains Dr Ghannoum. "Research projects focus on understanding the rich diversity within C4 photosynthesis and its evolutionary transition from the C3 pathway as a means of identifying potential targets for improving photosynthesis in C3 crops such as rice and wheat. Our research also looks at dissecting the sugar metabolism and signalling pathways in C4 plants in order to improve C4 photosynthesis through manipulation of carbon usage and translocation in target crops."

The ARC CETP is funded for a total of $22 million over seven years, commencing in 2014.