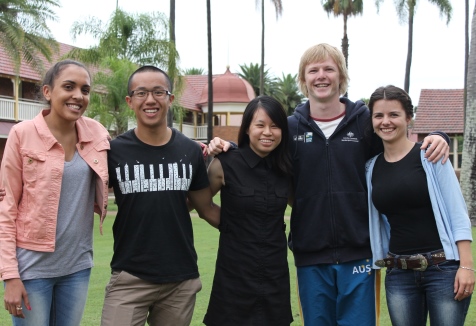 Travelling overseas to study is a pipe dream for many students, but four UWS students –Patrick Gan, Jasmin Hammond, Timothy Mann and Candice Skelton – are one step closer to realising this dream after being shortlisted by the Department of Foreign Affairs and Trade (DFAT) for a New Colombo Plan Scholarship. The students are competing to receive one of 40 scholarships being awarded as part of the Australian Government’s New Colombo Plan Scholarship Program, which gives students the opportunity to receive up to $67,000 to study and gain work experience in Asia.

Jasmin Hammond is currently in her second year studying a Bachelor of Natural Science (Environment and Health) degree on the Hawkesbury campus. If chosen for a scholarship, Jasmin says she’d like to travel to Hong Kong. “I am interested in studying at the Hong Kong University of Science and Technology because it is one of the highest-ranking science universities in Asia and offers a Bachelor of Environmental Science degree,” she explains. As a young Indigenous woman, Jasmin aims to work as an Environmental Health Officer when she completes her studies, to help protect the health of Indigenous people and promote the importance of Indigenous education.

Timothy Mann is in the third year of his Bachelor of Advanced Science degree and hopes to continue onto postgraduate studies before venturing into the world of climate research. “If my application is successful, I would like to study molecular biology at the University of Tsukuba for six months and undertake a two-month internship at the Riken Brain Science institute in Tokyo,” says Tim. “Both of these would greatly increase my practical and research skills and increase my employment potential.”

Patrick says he would head to Japan. “My true goal is to work as a financial delegate for both Japan and Australia to see how both countries are able to mutually benefit from an institutional relationship, as our culture and values are surprisingly similar,” he says.

Candice reveals that travel to Hong Kong is on her radar. “As an animal scientist, I am continually seeking to broaden my knowledge and understanding of animals and their role in our society,” Candice explains. “Part of this involves being aware of how different cultures value animals. There are many practices in Asia that are inconsistent with Australian perspectives.”

Some of the shortlisted students have noted that the experience has allowed them to practise new skills, particularly interview skills, communication skills and confidence in speaking with UWS academics.

“Interacting with academics within my degree and staff within the scholarship and University Global Mobility team … made me realise to the full extent that the UWS community is an accumulation of highly passionate and caring individuals who work together to create an enriching, inviting and supportive environment,” says Candice.

“The selection process has really readied me for job hunting in my near future, honing both my application writing skills and my interview skills,” Timothy says.

The shortlisted applicants were recently interviewed in Canberra with a selection panel comprising representatives from both the Department of Education and DFAT, members of the relevant diplomatic corps and representatives of the business community. The final outcome will be announced in June.

The merit-based scholarships are awarded to Australia’s best and brightest students who also show a commitment to their community and potential as a future leader.

UWS wishes all four students well and looks forward to the final announcement.

More information can be found on the New Colombo Plan webpage (opens in a new window).