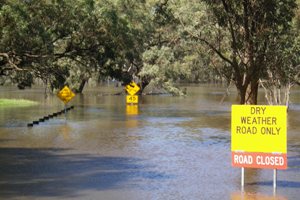 UWS staff members from the Institute for Infrastructure Engineering and Capital Works and Facilities have generously donated their time and effort to assist the flood stricken town of Hay.

Murray Bolden and Mitchell Quirk from the Institute for Infrastructure Engineering, and Robert Lockie from Capital Works and Facilities, are all volunteers with the Rural Fire Service (RFS) who were recently deployed to Hay to help the town with their flood levee.

The town’s levee held firm against flooding from the Murrumbidgee River, which peaked at 8.99 metres, but there were fears that the levee would not hold up given that the water was due to remain at its peak for a couple of days. 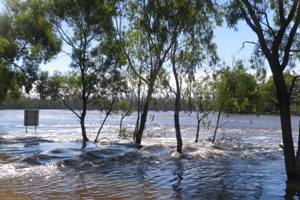 Murray, Mitchell and Robert spent numerous days in Hay patrolling the levees and assisting State Emergency Services (SES), local council and emergency services teams with ensuring that the integrity of the levee wasn’t breached and that locals were safe.

Murray says that volunteering to assist in times like this can be very personally rewarding.

‘Having a presence in the town was so important for the locals, to assure them that all was being done to protect their town and their homes and property from flooding,’ says Murray.

‘I joined the RFS in 2007 as I wanted to serve the community in some way and at the same time meet some new people and learn some skills along the way. Most volunteer organisations are struggling for members, including the RFS, and it is important that they continue to be supported as they provide a valuable service to the community,’ says Murray. ‘The amount of self satisfaction that one gets out of helping others is more than money itself can buy – it’s priceless,’ says Mitchell. ‘It was so good to see two volunteer organisations, the RFS and SES, working together to help the community of Hay and at the same time many of them also donated money to assist the local scout group.’

‘I joined the brigade to help others in my local community by utilising the skills I have learned over the years as a tradesman and engineer. The RFS is an organisation that prides itsself on community engagement by helping people to prepare, act and survive,’ says Robert.

Residents of Hay were urged to evacuate prior to the river peaking on Monday 19 March. Since then many have been given the all clear to return by the SES as the Murrumbidgee River levels subside. 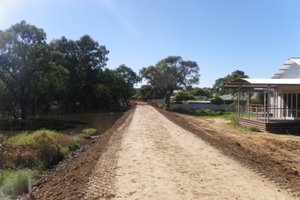