A Day in the Life of ... Darren Gardner

A Day in the Life of ... Darren Gardner 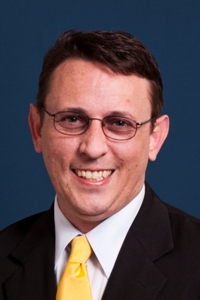 Darren Gardner is a Project Officer working on the Staff Profiles project that will be launched in March 2012.

Darren has worked at UWS since 2003 and has had many roles within Information Technology Services (ITS) including Lab Support and User Support Officer. He has several years experience working on project administration as well as spending three months as an Enrolments Officer in the Academic Registrar’s Office, when he participated in the UWS Internal Job Exchange program.

Here is a look at a ‘Day in the Life’ of Darren:

Early in the day
Until I have had my first coffee I am not worth talking to, but once that is in my system I am fully functional and ready to face the day ahead.

When I first arrive at UWS I check emails, prioritise my to-do list and update plans and issue logs. It is important to have a steady focus on what activities require attention when working on a project involving a number of separate units working towards achieving the same goal.

During the day
A majority of my time is spent working with ITS units and the Web Services Team. The Staff Profiles project is reliant on work being undertaken by Data Architecture and the Web Support Unit. We have some very skilled UWS staff involved in the project and because most of what they do is behind the scenes their efforts rarely receive the recognition they deserve (so my hat is off to David, Bonnie and Keith – keep up the good work).

The Staff Profiles project has three primary deliverables that I’m working on:

To achieve these outcomes I have regular team meetings that are normally held using Elluminate (web conferencing software) as the project team is spread across three campuses. I also have a number of meetings with stakeholders and UWS system owners to discuss the data we are pulling from their systems.

The best part of the day is being able to regularly cross items off the to-do list and see that significant progress is being made to ensure a successful delivery of the system.

Later in the day
When I’m not at work my passion is watching Nascar racing, so for 36 weeks a year I love watching cars go fast and turn left, or occasionally turn right, turn upside down and turn into pieces of what use to be a race car.

My other focus is my ongoing study towards my Bachelor of Arts/Teaching which I am doing via distance education, and which manages to eat up a lot of my free time during semester.