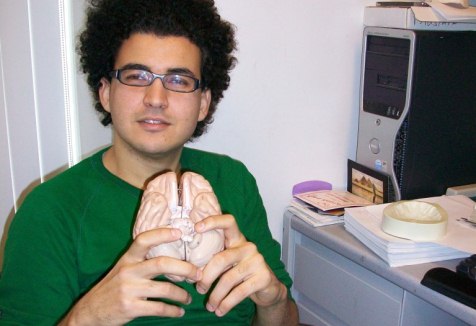 For people diagnosed with Parkinson's disease, slow movement, tremors, stiffness or all of the above are daily struggles. Dr Ahmed Moustafa, a lecturer from the School of Social Sciences and Psychology at the Bankstown campus who also works at the MARCS Institute, has developed a new computational model that will improve understanding about how Parkinson's disease medications affect the brain and behaviour.

In Parkinson's patients, nerve cells degenerate in the part of the brain that helps control smooth movements. These nerve cells produce a substance called dopamine, which tells the brain how to control movement. As the cells deteriorate, less dopamine is produced, causing tremors, stiffness and slow movement. Dopamine, therefore, is a standard medication for Parkinson's sufferers; however, until now, we have not understood how exactly these dopamine medications affect the brain nor why they cause negative side-effects in some patients.

Throughout his research, Ahmed has tested more than 150 patients diagnosed with Parkinson's and is working to identify motor and cognitive dysfunction in these patients. "This will help better develop tailored individualised medications for them," explains Ahmed.

Participants are asked to complete a computerised test, similar to a video game. Each of the tests is used to assess a certain cognitive process. "The benefits of these tests over questionnaires are that the computerised tests can be used in different countries without the need to translate and can also assess functions that can't be assessed by questionnaires."

The importance of having the right dose of dopamine medication is paramount to Ahmed's research. "Dopamine medications are more positive than negative," says Ahmed. "They treat many (but not all) of motor symptoms in patients with Parkinson's. Still, we have to be aware of the negative effects of medications."

In some cases, Ahmed explains, dopamine medications, especially newer dopamine agonists such as Pramipexole and Requip, can cause impulsive behaviour including gambling, hypersexual behaviour and binge eating. When this happens, neurologists are forced to either change medications or lower doses. If parts of the brain that were previously intact are overdosed with dopamine, they can be impaired. "Cognitive deficits, such as difficulty paying attention or impaired short-term memory, affect the quality of life of patients," explains Ahmed.

Ahmed also works with mathematical models to work out how different dopamine medications and different doses of these medications will affect the brain and behaviour. "We conduct our experiments on mathematical simulations before we test on patients," he explains. "Simulations limit our many attempts on human subjects and provide testable predictions on how medications might work."

The aim of this research is to help doctors prescribe individualised dopamine doses to patients with Parkinson's in order to reach maximum effect while minimising any side-effects.

Anyone suffering from Parkinson's disease who wants to get involved with the research project and students interested in finding out more are encouraged to contact Ahmed via email.