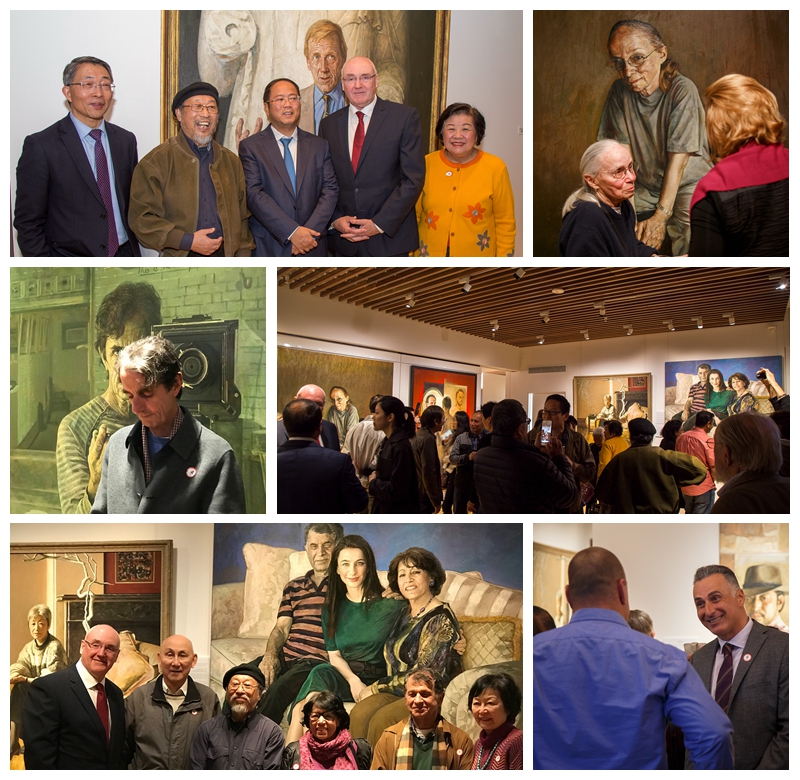 Australia’s Archibald Prize was the first major portraiture prize in Australian art. Named after J. F. Archibald, the editor of The Bulletin, it was first awarded in 1921 and has since been awarded annually. Celebrated Chinese Australian portraitist Shen Jiawei’s Archibald story started in 1992. In the last 26 years, he participated in the competition twenty-three times and was fourteen times a finalist, including runner-up in 1997. During this time, he made a reputation for himself as one of the top Australian portraitists. On 20 June, 2018, ACIAC had eight of his spectacular Archibald portraits (namely, “This Is Not a Photo” (Greg Weight), “Mabel”, “Yalda Our Girl”(Yalda Hakim), “Edmund Capon”, “How to Explain Art with a White Rabbit”(Judith Neilson), “Jiawei Shen’s Tri-selves”, “Andrew Sayers” and “Jenny Sages”) for a two-month exhibition. 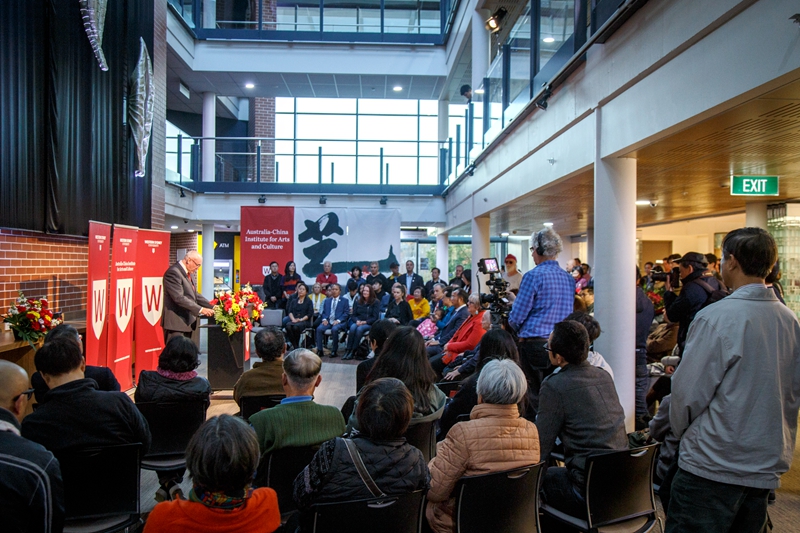 On 23 June, 2018, ACIAC hosted a grand opening to officially launch this highlight exhibition. The opening attracted a record number of some 200 participants. Joining the artist for the opening were his family, friends, fellow artists, patrons, sitters, subjects of his paintings and their families. Also attending the function were other art professionals, university academics, film makers, diplomats, politicians, corporate leaders, colleagues from the media, and community friends. Among them were MP for Drummoyne and Secretary for NSW Government Cabinet and the Premier, Mr. John Sidoti, Opposition Whip of the Parliament of New South Wales, the Honorable Shaoquett Moselmane MLC, and Cultural Counsellor from the General Consulate of People’s Republic of China Mr. Zhang Jingbao. 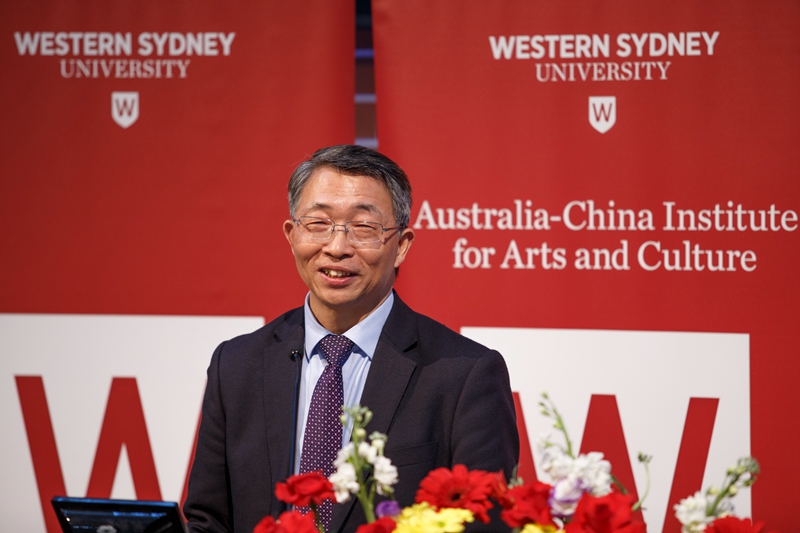 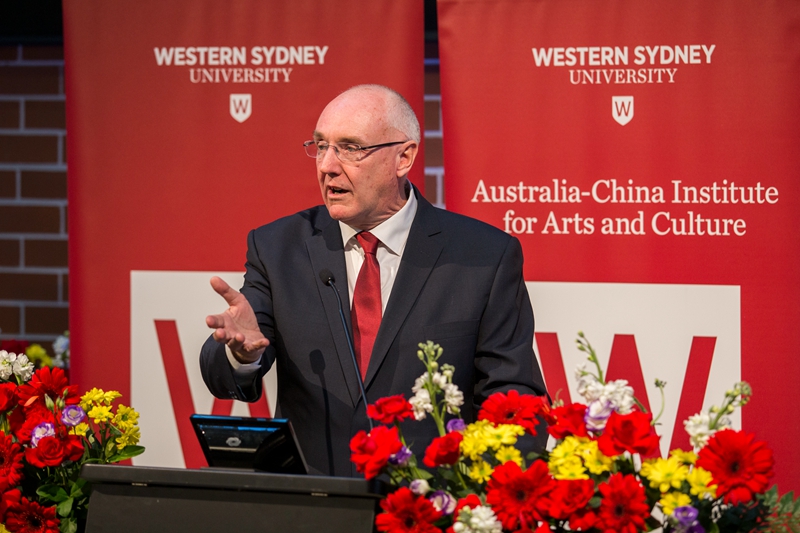 Professor Barney Glover in his speech acknowledged the country, and warmly welcomed the guests to the university. He commended Shen Jiawei for the fabulous art of his portraiture and a brilliant artistic career. And he believed the artist’s experience should start people rethinking the problems in current Australia-China relationship. He observed that Australia-China relationship shouldn’t stay on the level of economy and security because a healthier relationship between two countries needed a depth of understanding that arts and culture alone will provide. Stressing the importance of restoring the centrality of arts and culture to the Australia-China relationship, he acknowledged the Institute’s benefactor for the contribution he was making towards facilitating such profound transcultural communication between the two countries. He communicated his confidence that the Australia-China Institute for Arts and Culture and its work, given time, will contribute significantly to the mending of the strained relationship. 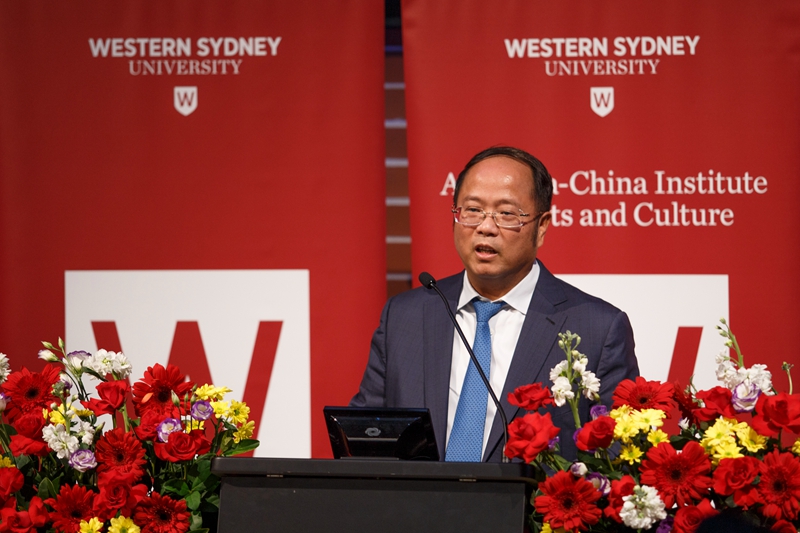 In his speech, Mr Huang Xiangmo congratulated Shen Jiawei on a brilliant career as a portraitist and the Institute on putting up yet another important event. Speaking about his three-generation family and his work as a business leader in Australia, he stated that he wanted his multi-billion-dollar business to do better so that he could help more Australians by generating more jobs. Rejecting the media stories that are hurting the Chinese-Australian community and poisoning the Australia-China relationship, he, too, said that he would continue to support arts and cultural exchange between the two countries and the kinds of work that ACIAC is doing. 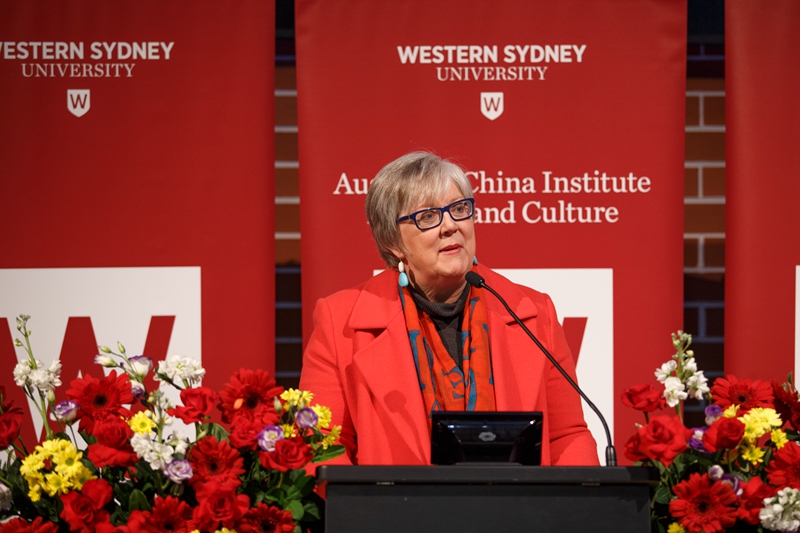 Ms Luis Guest began her speech by recalling her early encounters with Shen Jiawei’s art in the 1990s. Then she recounted Shen Jiawei’s early career as an artist back in China and some of the early works such as “Standing Guard for Our Great Motherland” that helped to establish his artistic reputation. And she celebrated his journey from Red Guard to ‘sent-down youth’ in the ‘great northern wilderness’, to famous young patriotic artist, to tourist sketches in Sydney to portraitist for local and global luminaries, from Popes and Princesses to Prime Ministers, and from Catholic saints to secular ones like Dame Marie Bashir. Speaking of Shen Jiawei’s love of history, she commended the artist for the depth that his historical awareness invariably gave to each of the faces that he painted. She used the examples of “Edmund Capon” and “How to Explain Art with a White Rabbit” to comment on the summary characteristics of his art as a painter of extraordinary virtuosity and also a deep thinker, a historian of his time. She invited viewers of this exhibition to look into the features and attitudes of the artist’s subjects and gain some insights into ourselves and our times. 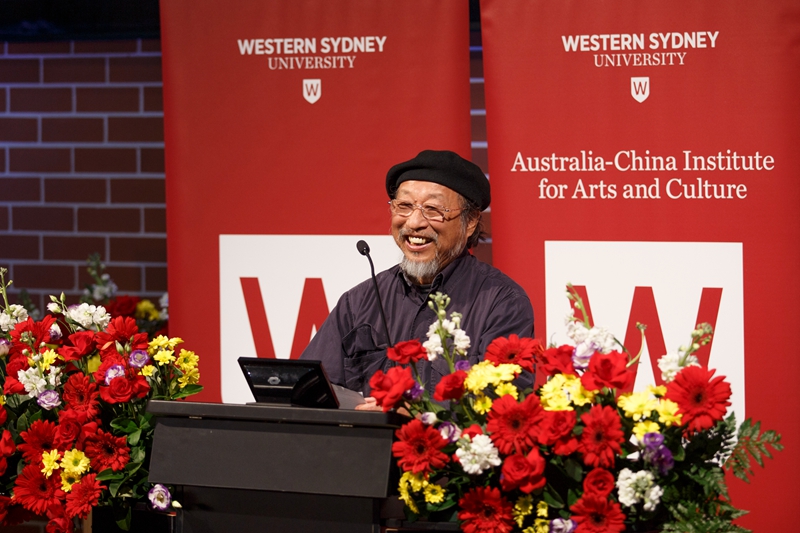 Shen Jiawei thanked the speakers for helping to launch the exhibition at ACIAC of Western Sydney University. And he also thanked the wonderful crowd for coming to his exhibition. Speaking of his early development as an artist, he acknowledged the enormous help that he had had from China. He was more thankful about having had the good fortune of resettling in Australia, because this country has offered him everything that he needed as a dedicated portraitist. For this reason, he called himself the luckiest artist in the world. He finally thanked his subjects and sitters present, among whom were Professor Mabel Lee of Sydney University, Australia’s Shanghai-born artist Jenny Sages, Ex-Director of the AGNSW and 33 years of Archibald Prize Organizer Edmund Capon, Australia’s leading photographer Greg Weight and Afghan Yalda Hakim and her parents.

Shen Jiawei was born in Shanghai and emigrated to Australia in 1989. His best known work, "Standing Guard for Our Great Motherland" (1974), was shown in the Guggenheim Museum in 1998. In 1995 Shen won the Mary MacKillop Art Award and received a medal from Pope John Paul II. He is now one of Australia’s leading portrait artists known for the academic and literary qualities of his works. His recent portraits include former Melbourne Lord Mayor John So (2003), the Hon. Tom Hughes AO QC, the portrait of Crown Princess Mary of Denmark (2005), and the portrait of John Howard, former Prime Minister of Australia,. Shen Jiawei is a winner of the 2006 Sir John Sulman Prize.