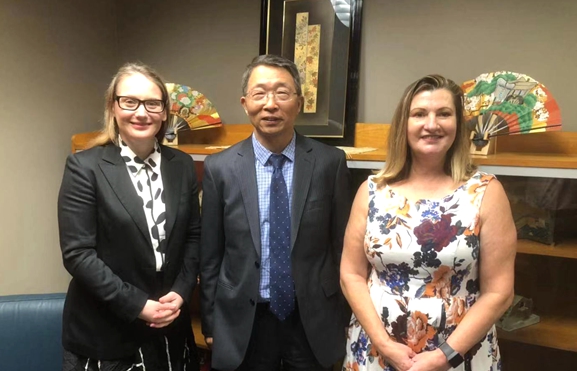 The Australia-China Institute for Arts and Culture (ACIAC) is building some partnerships with local business and government. In October 2018, it signed a partnership agreement to work with Willoughby City Council while the latter launched their preparations for the Celebration of Chatswood Year of the Pig 2019.

The City of Willoughby is a local government area on the Lower North Shore of Sydney. Initially proclaimed as the Municipality of North Willoughby in 1865, the city has its main commercial centre in Chatswood, home to one of Sydney's suburban skyscraper clusters.

On 11 December, 2018, Professor Labao Wang joined some of their colleagues in the Council to speak about Chinese culture in one of their training sessions. Festival & Event Producer / Team Leader Juliet Rosser moderated the session and over a dozen colleagues attended the training. Professor Wang’s presentation began with an introduction to the history, administrative structure, language(s), social customs and the arts and culture traditions of China. He then spoke about some of the practices found in Chinese social and business relations. He finally gave some comments on the Chinese population and its diversity in Australia. After his presentation, Professor Wang took questions about the nature of Cantonese, the relationship between Putonghua/mandarin and regional dialects, the cultural meaning of Chinese zodiac animals, the impact of economic development on China’s class structure, and problems of cultural retention for the children of first-generation Chinese migrants, etc.