At a recent International Symposium on Communication, Ecology and Cultural Heritage, which was jointly organized by University of Pennsylvania, Zhejiang University, and University of Wisconsin, Madison, in Beijing’s Penn Wharton China Center, on 7-8 June 2018, Dr. Kiu-wai Chu presented a paper titled “Dolphins and Mermaids: The Endangerments and Multispecies Coexistence in Hong Kong and Stephen Chiau’s The Mermaid (2016)”. Dr. Chu noted that, since the early 1990s, the drastic decrease of white dolphin population in Hong Kong had sparked a series of public reflections. Juxtaposing that burning issue with cinematic metaphors in Hong Kong, film director Stephen Chiau’s comedy The Mermaid (2016), his talk discussed how mythical creatures and environments in the film served both as a critique of environmental destructions in Hong Kong caused by excessive urban developments over the past two decades and an allegory of postcolonial Hong Kong under drastic transformations. By focusing on its speciesist representations and difference between whimsical interspecific romance and what Dr. Chu called “eco-empathy,” his presentation examined why The Mermaid falls short as a commercial comedy in cultivating viewers’ ecocritical awareness and in conveying more effective messages. 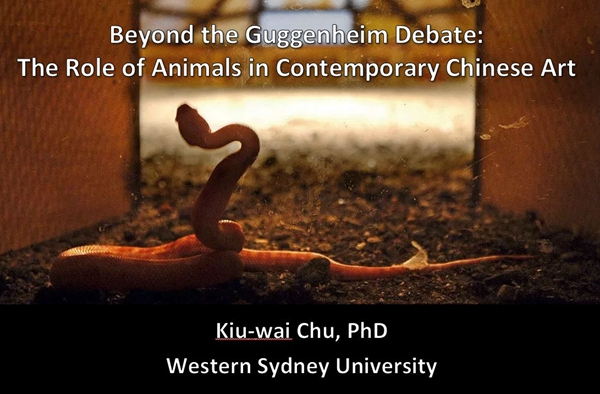 At the 2018 Conference of the Asian Studies Association of Australia held at the University of Sydney on 3-5 July 2018, Dr. Chu formed a panel on “Animal and Nonhuman Conditions in East Asia”. The panel was chaired by ACIAC Professor Jocelyn Chey. Dr. Chu’s paper “Beyond the Guggenheim Debate: The Role of Animals in Contemporary Chinese Art” looked into the recent Chinese art installations that are created with the use of animals, particularly by focusing on the controversy created over last year’s exhibition in the Guggenheim museum in New York. His presentation went beyond the ethical and political debates between the art specialists who advocate creative freedom and the non-art specialists led by the animal welfare advocates. And it questioned whether these avant-garde artworks, originally created in the 1980s and 1990s, are still relevant and provocative to the global audience of today.

In both papers, Dr. Chu stressed the fact that animals and imagined nonhuman species are often turned into metaphors that reflected the real life issues of humans and he highlighted the subordinate and exploited positions of human and nonhuman animals in the present world. He argued that these visual representations enabled us to better understand the complex relationships between human beings, animals and the environment. Through these discussions, Dr. Chu used contemporary Chinese visual culture to promote the notion of multispecies coexistence.