Traditional Chinese education depended heavily on a classical set of primer texts. Most of these texts were informed by Confucianist values beautifully packaged in extremely concise and memorable phrases and sentences. After the Chinese diaspora started a few hundred years ago, these texts were taken out of the country and some of them continued to be used in many overseas Chinese families. In the last two hundred years, some of these texts have been translated into other languages and came to be known in other cultures. 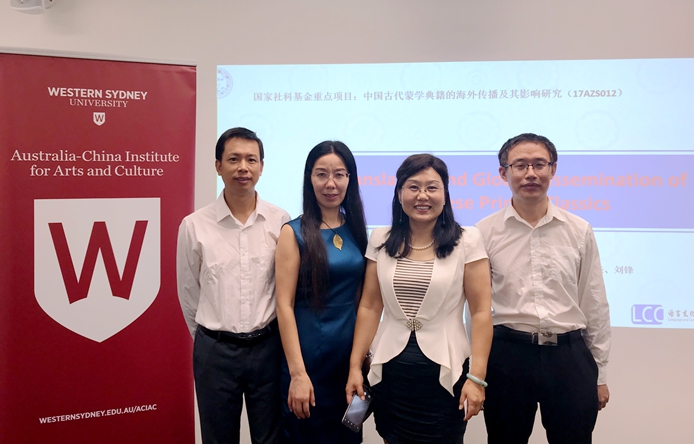 On 20 February, 2019, ACIAC’s four visiting scholars, Ren Xiaofei, Feng Ruizhen, Liu Feng and Zhang Jie, from China did a group seminar on the translation and dissemination of these ancient Chinese primer classics. The four scholars came from Jiangsu University of China to Western Sydney University in 2018. They have since 2017 been working on a national research project on the “global spread and influence of Ancient Chinese primer classics”. 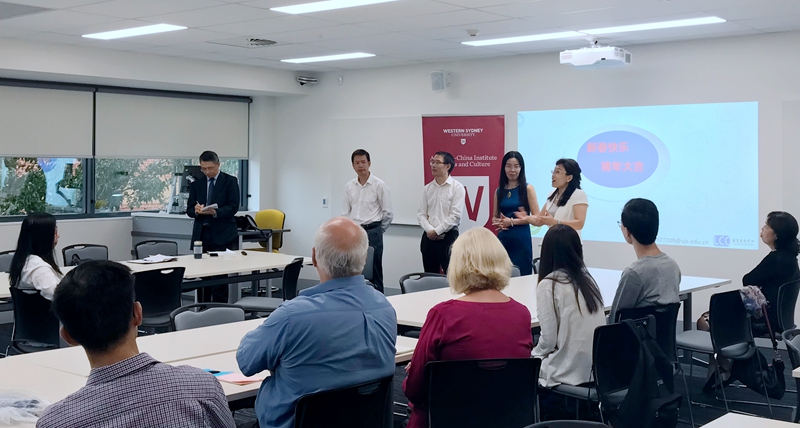 Professor Ren Xiaofei briefly introduced her university and spoke about the key concepts and theoretical framework of their research project. Professor Feng Ruizhen followed with a short presentation about her work on Qian Zi Wen (千字文, The Thousand-Character Writing). She introduced the origins of the work and discussed its various translations into ethnic and foreign languages. Dr Liu Feng spoke about his research into Zhu Zi JiaXun (朱子家训, Master Zhu’s Household Teachings). He looked into the existing translations of the text and proposed some principles for future attempts at retranslation. Speaking about his work on Ming Xian Ji (名贤集, Collection of Wise Men’s Words), Mr Zhang Jie cited the specific example of “junzi" (君子) to illustrate the enormous complexities in the translation of the text. Finally, Professor Ren Xiaofei wound up with a brief report on the results of an international students’ survey and her analysis of interviews with international colleagues.

The seminar was enthusiastically attended by ACIAC’s Adjunct Professor Jocelyn Chey, Professor Anthony Welch and Professor Shirley Chan of Sydney University, artists Jayanto Damanik Tan and Dongwang Fan, Ruiran Fraus from the City of Sydney, ACIAC's key researcher Dr Michael Williams and other staff and students of Western Sydney University. Towards the end of the seminar, the speakers took questions and comments from the audience relating to the ideological problematics of these historical texts such as gender bias and the potential colonialist implications of four cultural circles for the project’s theoretical framework. The audience also requested information about western explications and research on these Chinese early educational materials. And the speakers thanked the audience for their comments and advice.

Professor Ren Xiaofei is Professor of English and Translation Studies at the School of Foreign Studies, and she is also Dean of the School of Liberal Arts, and Director of the Language and Culture Centre at Jiangsu University. Her research interests include translation studies, corpus stylistics and intercultural communication. In 2014, she published a book entitled Introducing Corpus Stylistics in Drama Translation Studies. Professor Feng Ruizhen’s research interests include English for specific purposes, Anglo-American fairy tale translation, English literature and teacher development. She has translated and published 18 books in Anglo-American children’s literature, including Tarzan of the Apes, The Little Prince and The Silver Chair. And she has also published widely in academic journals. Professor Liu Feng had his PhD from Macau University of Science and Technology in 2018 and his academic interests include translation studies and cultural exchanges between the East and the West. He has contributed to research projects of various levels, and published widely in and outside China. Mr Zhang Jie is Director of Foreign Language Training in the Language and Culture Centre. His research interests include translation studies and Chinese-English translation practice. He worked as a translator in Singapore from 1997–2000. Up to now, he has translated and published many books, including John Ruskin’s Modern Painters, and Andrew Lang’s The Brown Fairy Book.