ACIAC Opens Its Exhibition of “Adam Chang’s Pandas and Treasures”

On 16 May, 2019, one of Sydney’s world-renowned Chinese Australian artists Adam Chang came to ACIAC for the opening of his exhibition — “Adam Chang’s Pandas and Treasures" — at Western Sydney University. A widely exhibited and collected artist, Chang grew up in Shanghai, China, but migrated from China to Australia in 1997. He was six times an Archibald Prize finalist and his portrait of Nobel Prize laureate J.M. Coetzee won for him the People’s Choice award in 2011. 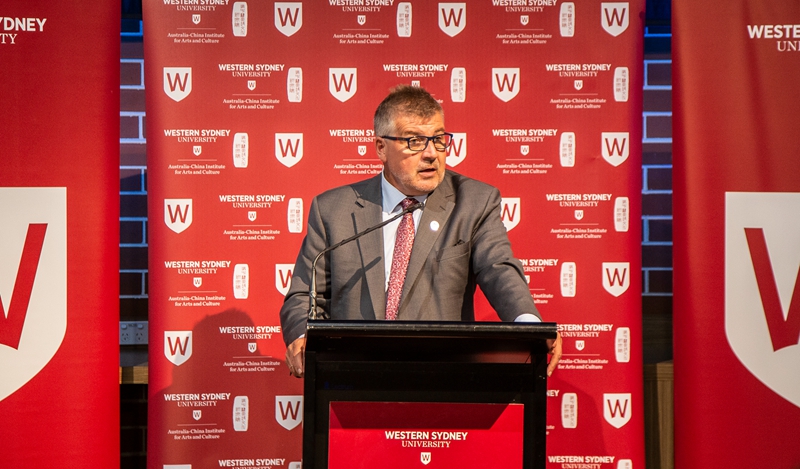 “Adam Chang’s Pandas and Treasures” features three award-winning portraits including “Salvador Dali”, “John Coetzee” and “Brian, the Dog and the Doorway”, and a series of four “Shanshui with Panda” paintings in various different colours. The opening attracted an enthusiastic crowd of some 200 people from in and outside the university. Senior Deputy Vice-Chancellor Professor Scott Holmes spoke and welcomed the visitors. Dr Gene Sherman, Founder, Executive and Artistic Director of the Sherman Centre for Culture and Ideas (SCCI) and eminent Chinese art historian Dr Yiguo Zhang were invited to speak and launch the exhibition. Dr Sherman recalled her early interest in Asia and China and her friendship with a whole generation of Australian sinologists such as Clare Roberts, Nicholas Jose, Linda Jaivin, and Geremie Barmé. She then spoke about the friendship between the artist and the Sherman family and some of the portraits Chang had done for her family members. She commended Chang’s achievements in the art of portraiture and praised the artist for his new explorations in the theme of harmony between man and nature through his recent “Shanshui with Panda” series. She congratulated the artist on the successful opening of this exhibition in Western Sydney University. Dr Yiguo Zhang, too, congratulated the artist on the exhibition at Western Sydney University. He spoke about the amalgamation of both Chinese and Western traditions as a distinctive feature in all of Chang’s art. Chang’s paintings, according to Dr Zhang, pointed to a possibility of a new language that could be created on the basis of a cultural eclecticism. He expressed his hope that Chang’s example would be followed by many more fellow artists for the future communication and collaboration between Chinese and Western colleagues. 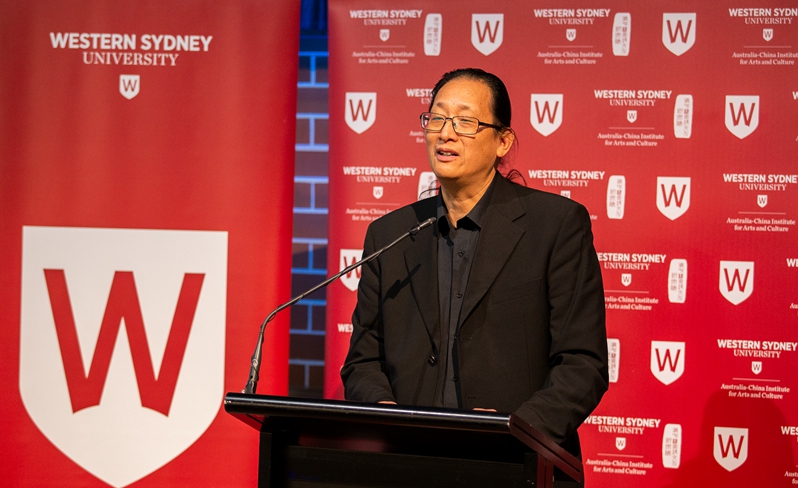 Chang thanked the speakers and his family and friends who had been involved in his development as an artist. He paid tribute to the home culture that nourished his talent while he was young, and he thanked his adopted country for allowing him to take off as an international artist. The Institute’s long-time friend and erhu player Ms Ying Liu and Australian cellist Andrew Wilson performed the warm-up music for the opening. The opening was also attended by Pro-Vice Chancellor of Western Sydney University Professor James Arvanitakis and other Western colleagues, Chang’s subject Brian Sherman, artists, Chinese community leaders, curators, gallerists, poets, and calligraphers from all over the city. The exhibition will be on for two months. All Western staff and students and members of the community are welcome to drop in and see the work of another contemporary Chinese Australian master.