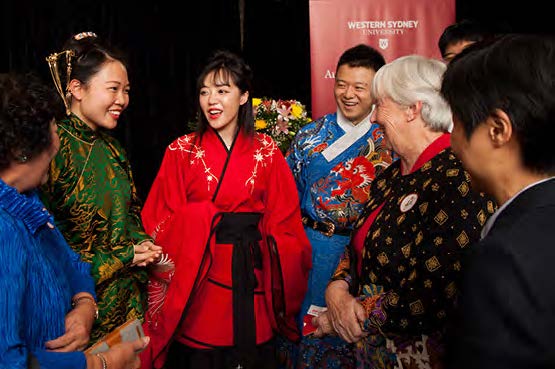 Western Sydney University celebrated the Chinese New Year with a splash of colour and sound as the Australia China Institute for Arts and Culture held a special Lantern Festival to mark the occasion. The Lantern Festival marks the first Full Moon after the Lunar New Year, and is traditionally a time to celebrate, meet friends and make an auspicious beginning for the New Year.

The special event featured an exhibition of calligraphy and art by graduate Shen Wednesday, inspired by teachings of Chinese Daoism and contemporary western art. In a further demonstration of the fusion of East and West, Associate Professor Bruce Crossman and student Joseph Tabua performed a jazz improvisation drawing on Chinese themes. The festival event also featured a fashion display featuring Hanfu, traditional dress worn by many people during the Lunar New Year. This year is the Year of the Rooster, and Institute Director Professor, Jocelyn Chey, told the audience how Chinese culture took moral and educational lessons from the natural world.

"The cock's comb is like an official cap and represents his civility;

Against his enemies, he uses his claws for attack.

When others oppose him, he shows his bravery;

When it comes to sharing food, he shows his humanity.

When every night he keeps watch until dawn, he shows his trustworthiness."

"Han Feizi's point was that humans should also have a combination of these five virtues. The world would be a better place if we could be more like the rooster!"

At the event, Professor Jocelyn Chey outlined the Institute's plans for the year.

"Central to the Institute's work are research and activities that enhance our understanding of Chinese culture, with translation and interpretation to be central to our work," she said.

"Our mission is to deepen Australia's cultural links with China, Hong Kong, Taiwan and other centres of Chinese culture and deliver research to government and industry to enhance diplomatic and economic relationships between those places and Australia."