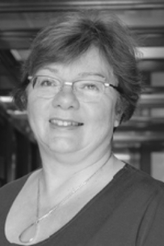 Eileen McLaughlin graduated from The University of Bristol UK in 1994 with a PhD in assisted reproduction and reproductive cryobiology, after which she was awarded a Wellcome Trust Fellowship in reproductive biology to work on the development of human male contraceptive targets at the School of Biochemistry. In 2000, she took up a post-doctoral fellowship to expand her work to female virally vectored immunocontraceptives in wildlife feral animal control with CSIRO and the Invasive Animal CRC in Canberra. In 2002, she obtained a lectureship at the University of Newcastle NSW, where she established an internationally recognised and highly productive lab working on ovarian follicular development, female and male germ cell development, chlamydial infection in the male testis and the effects of reproductive toxicants in multigenerational fertility. Eileen has published over 170 peer reviewed chapters and journal articles and been awarded over $35 million in research funding since arriving “Down Under”.

Eileen has a strong commitment to the support of reproductive and developmental biology as past chair of the British Andrology Society and past president of the Society for Reproductive Biology. She has served as a member of the ARC College of Experts and is currently chair and panel member of scientific advisory committees for ARC, NHMRC and the Irish Research Council. She was the University of Auckland lead for the newly established national Advanced Genomics Platform “Genomics Aotearoa” and in 2018 was appointed to the board of Science and Technology Australia.