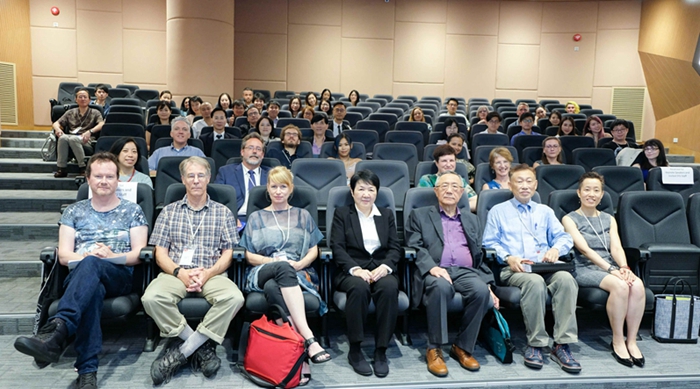 In June 2018, ACIAC’s research fellow Dr Kiu-wai Chu attended two conferences on Anthropocene Studies. The first on “The Anthropocene and Beyond: Towards a Shared Narrativity in Interdisciplinary Research” was held in Hong Kong Shue Yan University, on 29 May to 1 June 2018. It was well attended by both world-leading and emerging scholars and writers in the field of Environmental Humanities and Science fictions studies. Keynote speakers included Timothy Morton, Kim Stanley Robinson, Fiona Probyn-Rapsey and others. The second on “A Clockwork Green: Ecomedia in the Anthropocene” was an innovative Nearly Carbon-Neutral (NCN) international conference organized by the Environmental Humanities Initiative, University of California, Santa Barbara, in June 2018. (The conference took place entirely on the internet, aiming to facilitate intellectual exchange while limiting greenhouse gas emissions to a minimum. http://ehc.english.ucsb.edu/?p=17644 (opens in a new window).) Dr Chu spoke at both conferences on the topic of “Asian Speculative Cinema in the Anthropocene.” Speculative fiction has long been an under-developed genre in the Chinese, and perhaps in the broader Asian, literary and film scenes. Changes have been taking place in recent years, partly due to the intensifying environmental crises all over the world which have created a lot of uncertainty and anxiety about the unforeseeable future. One feels that a time of speculations in literary writing, and a new wave of studies of these speculative fictions seem to be coming.

In his two papers, Dr Chu discussed speculative cinema as an emerging genre in which its narratives and aesthetics can be seen not only in fictional films, but also in documentaries. Drawing his film examples from China and Vietnam, particularly Zhao Liang’s Behemoth and Truong Minh Quy’s City of Mirrors, Chu argued that speculative cinema was facilitating the re-imagining of Asian identities in the Anthropocene epoch. He pointed out that speculative films did not simply speculate about the external world in the future, but would play an important role in helping us to cope with the anxieties we would soon be experiencing in relation to our environmental challenges and losses.