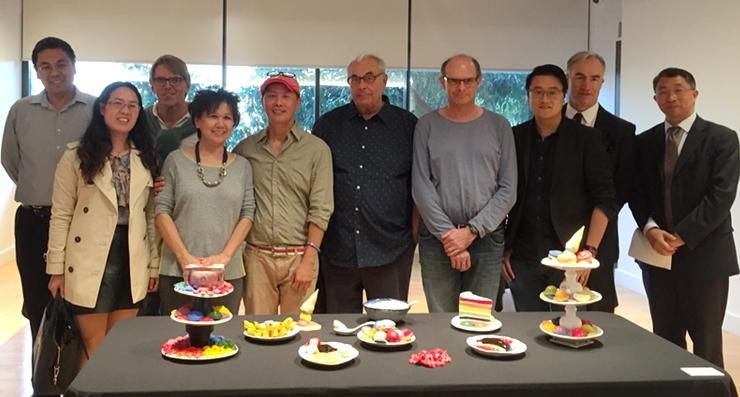 After an earlier photography show called “Everyday Dignity”, ACIAC Gallery is introducing a new art form to staff and students. On April 18, Chinese-Indonesian Australian artist Jayanto Damanik Tan came to the Institute to put up his first ceramic exhibition, “Offerings”, at Western Sydney University. On May 3, he and his artist friend Tony Twigg were at the Institute again to open the Exhibition. 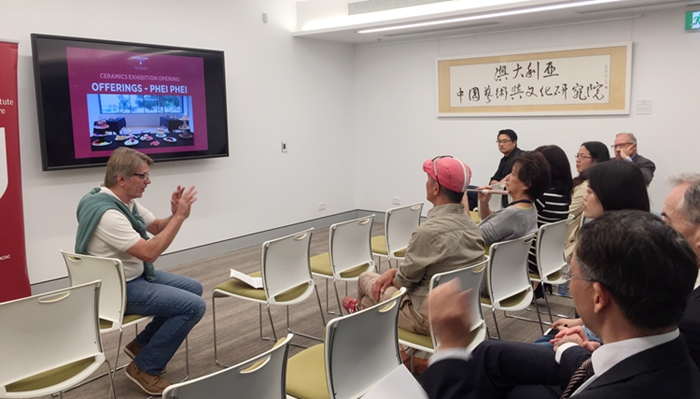 At the opening, Mr. Twigg spoke of his memories of their early friendship and recent collaborations. He drew attention to what he perceived as the key to all appreciations of Tan’s art: memories of family history. Twigg also commented on the transcultural nature of his works which owes itself to a deliberate compounding of elements from different cultures. He believed that Tan’s ceramic artworks have an emphasis on colour that deliver a personal expression of identity and diversity culminating in a celebration of liberation and creative freedom that is alert to a traditional and contemporary Chinese-Indonesian Australian identity. Born in North Sumatra, Indonesia, Tan is a Chinese-Indonesian immigrant living in Sydney, Australia. When he spoke, he revealed that much of his art makes a melancholic reference to the sufferings and tribulations that his family had been subjected to before he came to Australia. When he worked on the individual items for “Offerings”, he said, he had in mind the kinds of little food items that his mother used to prepare to offer to the universe. He recommended that viewers think about the process through which the ceramic artist works with clay and the time and effort that he puts into the artworks. The making of these ceramic artworks, he said, extends the time that he spends on his family and communicates that artist’s melancholy. These modest ceramic works monumentalize the memories that the artist bears of his mother, and constitutes an artistic offering to his mother’s offerings to the universe.