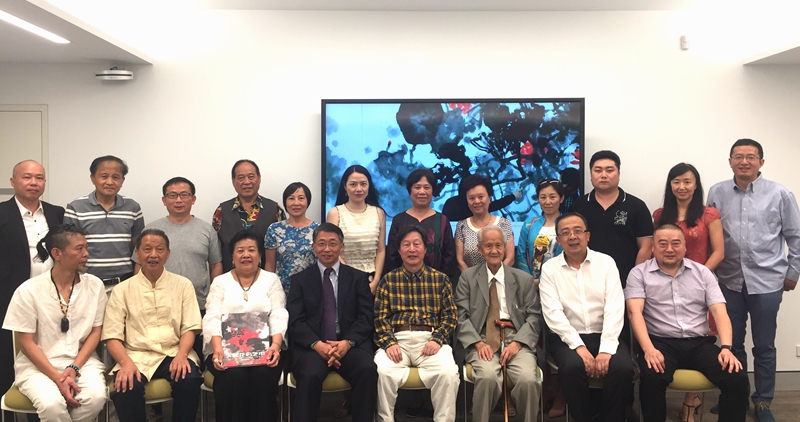 The Australia-China Institute for Arts and Culture is attracting more and more artists for exhibitions and seminar discussions in the new year. On 15 February, 2018, famous Chinese artist Mr. Xie Tianci (谢天赐) visited ACIAC to speak about his artistic career and practice in a seminar. Mr. Xie was joined by a number of local Chinese Australian artists, people from Sydney-based Chinese language media and other members of Chinese community in Sydney.

The seminar was co-hosted by ACIAC and the Asia Pacific Professional Managers Association(APPM). Active APPM member and ACIAC Advisory Board member Helen Sham-Ho and ACIAC Director Professor Labao Wang chaired the event. Professor Wang welcomed the visitors and introduced the Institute’s work since its founding. Madam Sham-Ho introduced the artist and his art. Mr. Xie spoke about the three stages of his artistic career: the early oil painting stage, the lotus stage and the birds & flowers stage. He revealed that his next stage would involve a major extension of horizons that is marked by an interest in Aboriginal Australian art. Passionately explaining his understanding of art, Mr. Xie told the audience that he didn’t start with a rigorous design when painting. Instead, he would begin most randomly with anything anywhere, but ultimately he would come back with a heightened sense of order in each work.